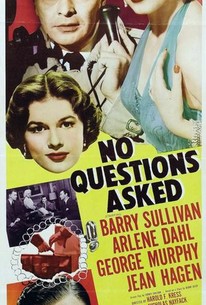 Barry Sullivan plays an eager young lawyer who is willing to sacrifice any and all scruples on the upward climb. He is put on retainer by a gangster, and soon is ankle-deep in an insurance racket. When he wants to pull out, Sullivan is framed for a gangland murder. No Questions Asked was in line with the harsher, less frothy fare produced by MGM during the Dore Schary regime. The screenplay was by former radio gagman Sidney Sheldon, who would later carve a literary niche for himself in the best-seller market of the 1970s.

Critic Reviews for No Questions Asked

A B-film with an ordinary and predictable story and below average acting.

There are no featured reviews for No Questions Asked at this time.