No Strings Attached (The Last Obsession) (1995) 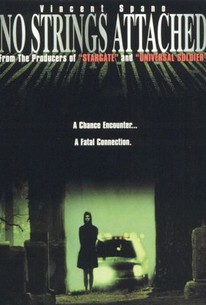 A reporter discovers both his writing and his sexual appetites can have deadly consequences in the thriller No Strings Attached. Vincent Spano plays Mark Demetrius, a journalist who is pressuring his editor, Elliot (Michael McKean), to run an investigative piece he's written on a psychiatrist with some very nasty habits. It seems one Dr. Singer (David Ackroyd) has a history of getting female patients addicted to drugs and then abusing them sexually. Elliot is reluctant to run the story, fearing legal reprisals, but agrees under the condition that Mark help him out by writing a puff piece on women's sexual fantasies. The magazine has set up a phone line for women to call in and discuss their desires, and one day Mark takes a call from Nicole (Cheryl Pollak). Mark becomes fascinated with Nicole, and is obsessed with meeting her, despite a happy, long-term relationship with his fiancée Sarah (Traci Lind). Mark eventually meets Nicole and she seduces him (not that he minds), but Mark soon discovers Nicole is not all she seems to be as his life and career are both placed in grave danger. Displaying a bit more style and smarts than the average erotic thriller, No Strings Attached was directed by Josef Rusnak, who later went on to make The Thirteenth Floor.

Critic Reviews for No Strings Attached (The Last Obsession)

There are no critic reviews yet for No Strings Attached (The Last Obsession). Keep checking Rotten Tomatoes for updates!

There are no featured reviews for No Strings Attached (The Last Obsession) at this time.