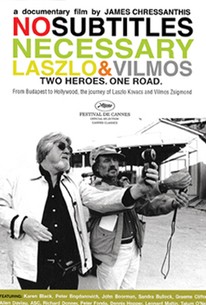 Laszlo Kovacs and Vilmos Zsigmond were two of the best and most influential cinematographers working in Hollywood in the Sixties and Seventies; between them, they worked with the likes of Robert Altman, Martin Scorsese, Steven Spielberg, Brian DePalma, John Boorman, Peter Bogdanovich, Hal Ashby, Peter Fonda, Dennis Hopper, and Paul Mazursky, helping shape the look of some of the most vital films of the decade and showing new ways to balance beauty and realism on screen. Surprisingly, these two master cameramen were not professional rivals, but close friends who came to the United States in 1957, fleeing their native Hungary after Soviet troops rolled into the country to put down a people's revolution (which the young cinematographers helped document with newsreel cameras). After cutting their teeth in the United States shooting a variety of low-budget projects, Kovacs enjoyed a commercial breakthrough when he shot Easy Rider in 1969, and Zsigmond made his name a few years later with McCabe and Mrs. Miller and Deliverance; the two remained close friends and colleagues, and Zsigmond remains active today, while Kovacs stayed in the film business up until his death in 2007. No Subtitles Necessary: Laszlo and Vilmos is a documentary which explores the professional and personal lives of these two gifted craftsmen, created with their cooperation; it features interviews with a number of their friends and collaborators, including Peter Fonda, Dennis Hopper, Bob Rafelson, Karen Black, Sharon Stone, Haskell Wexler and Tatum O'Neal. ~ Mark Deming, Rovi

...traces the two men's careers from photographing together the 1956 Hungarian Uprising to filming between them many of the most important and influential films of the late 20th century.

"No Subtitles Necessary" is an insightful documentary about noted cinematographers Laszlo Kovacs and Vilmos Zsigmond who not only escaped Hungary shortly after the unsuccessful 1956 uprising but also risked their lives filming some of it for western news sources. After coming to America, they worked a series of odd jobs before going to Hollywood where they worked on a series of odd movies before hitting it big. That came in 1969, just as Hollywood was getting interesting, as their naturalistic styles became very influential over the following decade. And that's not to mention the documentary identifying the close relationship between cinematographers and actors, eloquently expressed best by Sharon Stone. Considering we already know so much about "Easy Rider," why not try to include an anecdote or two from Dennis Hopper's infamous "The Last Movie," instead? Plus, in the movie's dual format, it is tougher to separate the careers of Kovacs and Zsigmond. For example, I am still not quite sure who was supposed to be the handsome one.