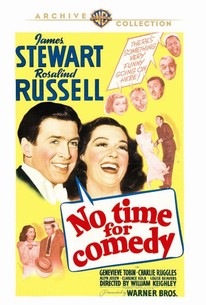 No Time for Comedy Photos

S.N. Behrman's hit Broadway show about a guy who writes hit Broadway shows comes to the screen in this comedy. Gaylord Esterbrook (James Stewart) is a reporter from Minnesota who writes a play about life in New York City -- a place he's never visited. To his surprise, a Big Apple producer wants to stage Gaylord's show and asks him to come to New York immediately. While Gaylord hardly seems like a Big City sophisticate, his regular-guy charm makes a big impression on leading lady Linda (Rosalind Russell), who is tired of jaded braggarts like her director, Morgan (Allyn Joslyn). Gaylord and Linda get married, and he becomes one of the most successful playwrights in town, but his new popularity goes to his head, and Linda wonders what happened to the man she married. However, Gaylord's career takes a turn for the worse when he meets Amanda (Genevieve Tobin), a snooty high society type who convinces him that he ought to be writing the Great American Tragedy instead of crowd-pleasing comedies.

Selmer Jackson
as First-Nighter
View All

Critic Reviews for No Time for Comedy

There are no critic reviews yet for No Time for Comedy. Keep checking Rotten Tomatoes for updates!

Audience Reviews for No Time for Comedy

Jaunty comedy-drama with the two stars well matched. They receive excellent support from every one else in the cast but Louise Beavers stands out as their sassy maid Clementine. Some of the attitudes are dated particularly in respect to alcohol consumption but putting that into the perspective of the time this is a great way to spend a couple of hours.

Rosalind Russell knocks me out. I couldn't keep my eyes off of her in this comedy turning to near tragedy. Except for the sudden happy ending, this is a perfect example of how pure comedy can be transformed to near tragedy in a brilliant manipulation of the script and the audience. It's as if this movie has an absolute split personality.

Depending on what mood you're in when you watch it, you may very much appreciate the abrupt about face at the end: Jimmy Stewart and Russell managing to snatch happiness from the jaws of despair. If I'd had a chance to go over the script, however, I'd have left them separated, in the tradition more of Shaw's Pygmalion rather than the Hollywoodesque My Fair Lady.

This one is a joy for any Stewart fans and pure pleasure for Russell fans. Like Irene Dunne, she is one of the smartest actresses ever to grace the silver screen. For this one, and for classic favorites such as Auntie Mame, I must add her to my all-time favorite actors list.

No Time for Comedy Quotes