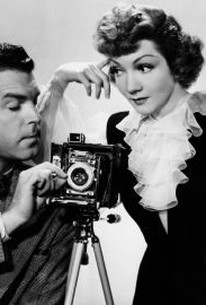 No Time for Love Photos

Mitchell Leisen utilizes his stylistic pizzazz to enliven this romantic comedy that proves the old adage "opposites attract" -- but only after three or four reels. Claudette Colbert is Katherine Grant, an upper-crust fashion photographer who has a gang of admirers snapping at her heels. When her vindictive editor tries to teach her a lesson for her snobbishness by giving her an assignment photographing lower-class workers digging a tunnel, she falls for Jim Ryan (Fred MacMurray). Ryan is also attracted to her, so when she leaves her camera tripod in the tunnel, Ryan obligingly returns it to her. When Ryan returns to the job site, he is ribbed by his co-workers. Ryan loses his head and gets into a fight and is subsequently suspended from his job. Katherine, feeling guilty about Ryan being suspended from his job (and also looking for an excuse to have him around), hires him as her assistant. But in his new job, Ryan starts to put the make on one of Katherine's flirtatious models, Darlene (June Havoc). Katherine must now find a way to overcome her superior attitude and make her true feelings known to Ryan. ~ Paul Brenner, Rovi

Frederic Henry
as Man at Party

Jack Roberts
as Captain of Waiters

Ronnie Rondell
as Captain of Waiters

George Dolenz
as Captain of Waiters
View All

Critic Reviews for No Time for Love

Fun and original as few are. [Full review in Spanish]

Audience Reviews for No Time for Love

Agreeable little romantic comedy with Claudette and Fred well matched. The story is lightweight but Leisen was expert at making this kind of fluff enjoyable. June Havoc is sassy as a flashy showgirl.

No Time for Love Quotes