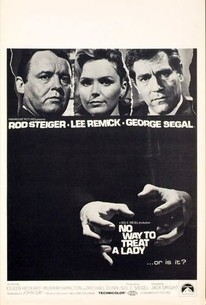 No Way to Treat a Lady Videos

No Way to Treat a Lady Photos

John Gay adapted William Goldman's novel for this black comedy about a New York police detective who is trying to catch a serial killer that preys on women. Rod Steiger has a field day as the murderer, a master of disguise (appearing as an Irish priest, a German plumber, a gay hairdresser, a woman) who delights in telephoning and tormenting the cop who's out to nab him.

Michael Dunn (I)
as Kupperman

Richard Nicholls
as Man in Sardi's

John Dutra
as Man with Dog

Vincent Sardi
as Himself

J. Molinski
as Himself

Louis Basile
as Customer
View All

Critic Reviews for No Way to Treat a Lady

Steiger is fine in tricky mystery directed by Jack Smight.

A terrific mystery thriller that's both suspenseful and human. Segal is especially winning.

A thoroughly enjoyable film about a pitiless serial killer of middle-aged women, that is played for laughs at the expense of the women victims.

Audience Reviews for No Way to Treat a Lady

This is a very strange movie, and not in a good way. Half of the time it's pretty good, though, and there are a couple of funny things that happen. The other half it's stupid and boring. This movie's just okay.

No Way to Treat a Lady Quotes