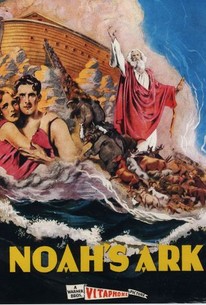 Working with parallell narratives, one telling the title story and the other of a WW I-era train wreck, this epic spectacular is a film with a tragic history that illustrates that back in its early years, movie-making was truly risky business. The same cast appears in both stories. The first half of the film is totally silent and the second contains some sound. The film is unusually violent and realistic. The flood scenes are particularly disturbing especially when it is realized that many of the floundering extras were actually drowning. The film's original cameraman, Hal Mohr could see that production designer Anton Grot's sets were quite dangerous and had the potential of doing damage when the flood scenes were filmed. He pleaded with Grot to change them, but Grot refused. Mohr left the film and was replaced by Barney McGill who captured the tragedy on film. When looking for this film, avoid the 1957 reissue as it has been chopped down from 135 to 75 minutes. The 1989 restored version is preferable.

Anders Randolf
as German/Leader of Soldiers

Joe Bonomo
as Aide to Leader of Soldiers (uncredited)

John Wayne
as Extra
View All

This Biblical spectacle goes on and on as if one hadn't sat through a modern story -- of great quantity, if nothing else.

A spectacular and ambitious part-talkie epic which marries a Biblical theme (the Flood) with a romance set on the eve of the Great War.

The Warner staff show everything conceivable under the sun -- mobs, mobs and mobs; Niagaras of water; train wreck; war aplenty; crashes; deluges and everything.

A true "spectacular" in every sense of the word,

Aiming for De Mille blockbusting, it boasts some fake-Babylonian splendor, though none of C.B.'s lascivious-prurient absurdism.

Noah's Ark isn't just a fascinating curio from a very bygone era, it's surprisingly entertaining -- and it is most certainly a spectacle of note.

A hokey World War I tragic romantic melodrama about man's inhumanity that runs parallel with the biblical story of Noah's Ark.

There are no featured audience reviews yet. Click the link below to see what others say about Noah's Ark!