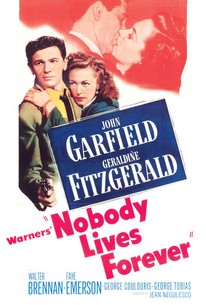 A disillusioned soldier returns from WW II to find himself unable to resume his dubious career as a con-man and gambler. He is also flat broke as his girl friend has stolen all his cash and taken up with another. Alone, disenfranchise and utterly broke, his thoughts turn to vengeance. After forcing those who commandeered his gambling operation to pay for his portion, the vet heads for sunny California. There he meets his former mentor who tries to interest the youth in an elaborate new con involving a wealthy young widow. The deal is that he will seduce he out of her money and then split the money with his partners. But the plan changes when the soldier falls in love with the girl. Unfortunately, his femme-fatale of an ex-girl friend shows up to complicate matters by telling the vet's partners that he is planing a double-cross.

Critic Reviews for Nobody Lives Forever

A melodrama directed by Jean Negulesco with film noir style.

Audience Reviews for Nobody Lives Forever

Not strictly noir although it has components of the genre this is a solid drama. More of a hybrid of noir and gangster flick with an excellent cast lead by the exemplary Garfield and Geraldine Fitzgerald.