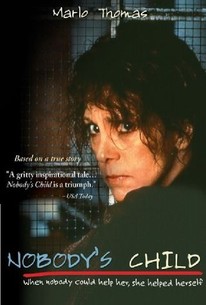 Marlo Thomas fully justifies her star status in the made-for-television Nobody's Child. Ms. Thomas portrays the real-life Marie Balter, a Massachusetts woman consigned to a mental hospital after a suicide attempt at age 16. For the next 20 years, Marie is and out of the institution, mostly under the care of a sensitive doctor (Caroline Cava) who treats her for panic disorder and depression. Finally able to curb her inner demons without the use of drugs and therapy, Marie leaves the hospital for good, hoping to pursue a normal life. She falls in love with another ex-mental patient (Ray Baker), and strives successfully to earn a college diploma (she later became a health administrator). Aside from Marlo Thomas' Emmy-winning performance, Nobody's Child boasts the stunning camerawork of longtime Ingmar Bergman associate Sven Nykvist. One scene, in which Marie Balter imagines she sees serpents emerging from a typewriter, is as frightening a piece of celluloid as has ever been presented on television.

There are no featured audience reviews yet. Click the link below to see what others say about Nobody's Child!