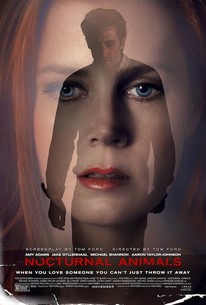 Winner of the Grand Jury Prize at the 2016 Venice International Film Festival. From writer/director Tom Ford comes a haunting romantic thriller of shocking intimacy and gripping tension that explores the thin lines between love and cruelty, and revenge and redemption. Academy Award nominees Amy Adams and Jake Gyllenhaal star as a divorced couple discovering dark truths about each other and themselves in NOCTURNAL ANIMALS.

Michael Sheen
as Carlos
View All

A gorgeous, harrowing and occasionally bizarre meta-thriller that mixes multiple narrative threads together with beautiful visuals and a breathtaking score.

Nocturnal Animals is a frantic fever dream of the ways we betray and disappoint ourselves and those we love.

Nocturnal Animals ultimately reaches for something that isn't there, and falters. Ford is the consummate commercial artist, but he seems to hate it - while still, as an artist, trafficking in it.

That's what this movie is, really: a beautiful, shattered, f***ed-up dream.

Ford doesn't have anything especially new or interesting to say about the nature of vengeance or love, or the emptiness of material riches. But Nocturnal Animals has fun and looks damn good saying it. Maybe that's enough.

With Nocturnal Animals, Ford shatters common romance tropes like second chances and serendipity, and explores the roles classicism, suppression, and rage play in destroying those ideals.

Nocturnal Animals is a dark, dense, and beautifully crafted thriller with a killer ending that will stick with you long after it's over.

Nocturnal Animals matches Tom Ford's A Single Man in terms of its visual vibrancy and solid performances, but it has opted to replace its beating heart with a leaden paperweight.

A gripping and remarkably accomplished piece of storytelling...

Yes, the performances are almost universally excellent, but the depictions don't seem to serve as much more than provocative material for a dirty, pulp story.

Some have been comparing it to the Holy Trinity of surreal noir, Hitchcock, Lynch and Kubrick, but for me it is more like a bloodspattered glossy magazine come to life.

Nocturnal Animals' pristine, meticulous design and aesthetic choices, along with its big name cast and Fall release, will earn it the distinction of a "prestige drama" or, at best, "psychological thriller."

Meticulously crafted relationship / revenge drama with a very unusual narrative. Beautifully filmed, well acted and flawlessly directed the movie won't leave anyone indifferent, offering plenty of food for thought. Although the ending does not answer all questions the regular viewer might expect from his viewing experience, you still gotta admire the attempt to do something different here.

Former fashion-designer Tom Ford took his first steps into film directing with A Single Man in 2009. It's a film that didn't initially catch my eye but when I finally caught up with it, it really impressed. In fact, I thought it a near masterpiece of style and composition. As a result, I've been very eager to see what Ford would do next and although his follow-up isn't quite as good as his debut, there's still much to recommend. Plot: Wealthy art curator Susan Morrow (Amy Adams), receives a manuscript from her ex-husband Edward Sheffield (Jake Gyllenhaal). As she settles into reading Edward's story, she is forced to confront her past and the breakdown of their relationship as the story within the manuscript turns violent and deadly. Based on the novel Tony and Susan by Austin Wright, there's a clever structure to Nocturnal Animals. It's a story within a story and not being content with that, it also employs flashbacks just to make it more narratively complex and frames it's all as three stories in one. The stories aren't vignettes or separate, though. They are very much related and feed into each other as the film addresses the differences between past and present and the fine line between reality and fantasy with one fictional story even serving as a metaphor for another. It's quite an ambitious project for Ford in only his second film but he's able to keep command of all the narratives and manages to combine a reflective drama with a mysterious, psychological thriller while bringing it all together to make a complete and coherent whole. It's not just Ford's narrative juggling that impresses, though. There's plenty to admire throughout the entire film; Ford's direction is ambitious and, like his work in A Single Man, he has a keen artistic eye with some vibrant and striking imagery captured by Christopher Brown's art direction, Seamus McGarvey's sombre cinematography and the gorgeous production design by Shane Valentino and Meg Everist invites you into the characters' dark, dual existences without ever losing its consistent tone. It also boasts a very impressive cast who are all on good form; after her anchoring work in Arrival, the always reliable Amy Adams delivers another reserved performance; the Oscar nominated Michael Shannon manages to convey so much with the minutest facial expression and Golden Globe winning Aaron Taylor-Johnson tackles a darker role, that he's not normally associated with. Put simply, he knocks it out the park and I hope that Johnson continues to explore more of his range in the future. Like the performances themselves, there are so many layers to Nocturnal Animals that it stays with you long after the credits have rolled. It's had its critics with many claiming style over substance as a major issue. Personally, I disagree, and happen to think it has an abundance of both. It's a very well crafted film that's awash with symbolism and has you continually questioning it's meanings and messages. A complex and elegant love story that successfully interweaves with a sadistic film-noir. Tom Ford has shown that A Single Man was no fluke. This a director with sophistication and one that delivers material that's as dense as it is captivating. Mark Walker

The dialogue is a little bit heavy-handed sometimes, but still Tom Ford brings us a sophisticated and well-acted thriller about marital disillusion and resentment, blending reality with "fiction" using stunning scene transitions, superb editing and a gorgeous cinematography.