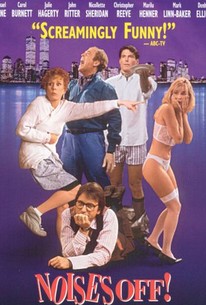 Michael Frayn's frantic West End and Broadway farce makes a literal transformation to the screen in Peter Bogdanoch's faithful adaptation, which is transplanted from the London suburbs to Des Moines, Iowa to accommodate the (mostly) American cast. Michael Caine stars as director Lloyd Fellowes, assigned to bring the successful British sex farce "Nothing On" to the boards in America. In an intricate technical rehearsal, Lloyd puts his cast through their paces -- Garry Lejuene (John Ritter), an obliging feature actor; Dotty Otley (Carol Burnett), a fading theatrical star; Frederick Dallas (Christopher Reeve), a handsome leading man who demands to know the motivation behind every scene; Brooke Ashton (Nicollette Sheridan), the sexy leading lady; Belinda Blair (Marilu Henner), the seen-it-all second female lead; and Seldson Mawbray (Denholm Elliot), the inebriated character actor. The technical rehearsal goes off without a hitch, but as the play travels the country in pre-Broadway performances, the eccentricities of the cast come to the fore and the performances in Des Moines and Cleveland are complete disasters.

Bronson Dudler
as Bum at Curb

Bronson Dudley
as Bum at Curb

Critic Reviews for Noises Off

It unavoidably loses some of its brilliance on film: much of the fun was the suspense of seeing live actors survive the demands of the slapstick. But Bogdanovich's frenetic transplant supplies so many belly laughs it seems ill-spirited to complain.

Sexual innuendo in farce about actors putting on a play.

Works much better as stage vehicle, but loaded with stars and laughs.

Someone turned the farce up to eleven.

It was better on stage, but the movie isn't unwatchable

Audience Reviews for Noises Off

I can't imagine how this play is accomplished on live stage (and it is). Well I have seen a live theater version of this play now, and I still can't imagine the talent necessary to make it as successful as the movie. A miscast character can ruin quite a few scenes and it is hard to get the entrances and exits as snappy as this appears 'cause there is the benefit of cutting the film. The ensemble cast in this movie is outstanding. And I can't praise the TIMING of the action and dialog enough! This is THE farce to end all farces!

It was cute. It wasn't as horrible as I had heard it was. I do agree that it doesn't translate as well on screen. Go see the live version it is absolutely hilarious.