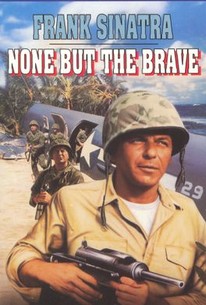 None But the Brave Photos

Frank Sinatra took over the directors' chair for the first (and only) time in this unusual WWII drama. Lt. Kuroki (Tatsuya Mihashi) is the leader of a Japanese platoon stranded on a remote Pacific island, where with an iron hand he oversees the construction of a rescue ship. An American plane crash-lands on the island, leading to a skirmish between the two rag-tag legions; eventually, both sides call a truce, and medical officer Maloney (Sinatra) treats a Japanese soldier who was seriously wounded in the fighting. American commander Capt. Bourke (Clint Walker) and Lt. Kuroki come to an agreement -- they will work together to bring needed help to the island, but once either side's forces reach them, the fighting will pick up where it left off. None But the Brave was an international co-production of Artanis Productions (Sinatra's production company -- "Artanis" is Sinatra backwards), Warner Brothers, Tokyo Eiga, and Toho.

Critic Reviews for None But the Brave

Singer Tommy Sands, at the time married to Nancy Sinatra (they divorced later that year), is absolutely terrible as a barking lieutenant, with his performance almost single-handedly crippling the movie.

... a familiar lesson in the futility of war, but [director Frank] Sinatra has an easy way with the actors and lets them carry the scenes.

Audience Reviews for None But the Brave

There are no featured audience reviews yet. Click the link below to see what others say about None But the Brave!

None But the Brave Quotes