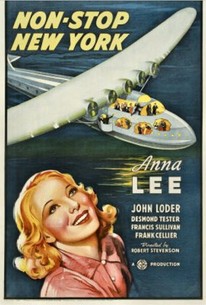 While W.C. Fields poked fun at the asinine notion of a high-speed airplane with an open observation deck in Never Give a Sucker an Even Break (1941), the producers of the futuristic British melodrama Non-Stop New York (1937) take this notion quite seriously. The film's setpiece is a streamlined luxury plane designed for transatlantic passenger flight (something that would not become a common occurrence until 1940). Anna Lee plays a chorus girl whose has been targeted for extermination by the London underworld because she can provide an alibi for a murder suspect. The police won't believe her, but that doesn't dissuade the syndicated hit men. Seeking escape, Lee stows away on a plane bound for New York; the gangsters follow, overpower the pilots, and parachute from the plane, leaving Lee and the passengers helplessly hurtling through the clouds. The day is saved by detective John Loder, who'd also boarded the plane in search of Lee. The climax involves an aerial fistfight on the wing of the speeding plane. If you believe this sequence, chances are you'll swallow whole the rest of Non-Stop New York: if not, you'll have a grand old time all the same. The script by (among others) Curt Siodmak and Roland Pertwee was based on Sky Steward, a novel by Ken Attiwill.

Alexander Sarner
as (uncredited)
View All

There are no critic reviews yet for Non-Stop New York. Keep checking Rotten Tomatoes for updates!

There are no featured reviews for Non-Stop New York at this time.