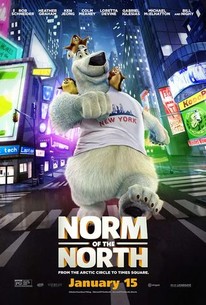 Critics Consensus: A pioneering feat in the field of twerking polar bear animation but blearily retrograde in every other respect, Norm of the North should only be screened in case of parental emergency.

Critics Consensus: A pioneering feat in the field of twerking polar bear animation but blearily retrograde in every other respect, Norm of the North should only be screened in case of parental emergency.

Critic Consensus: A pioneering feat in the field of twerking polar bear animation but blearily retrograde in every other respect, Norm of the North should only be screened in case of parental emergency.

Norm of the North Videos

Norm of the North Photos

A polar bear of many words, Norm's greatest gripe is simple: there is no room for tourists in the Arctic. But when a maniacal developer threatens to build luxury condos in his own backyard, Norm does what all normal polar bears would do...he heads to New York City to stop it. With a cast of ragtag lemmings at his side, Norm takes on the big apple, big business and a big identity crisis to save the day. -- (C) Lionsgate

Michael McElhatton
as Laurence, the Actor

News & Interviews for Norm of the North

How Family-Friendly is The Huntsman: Winter’s War?
Box Office: Leo Fights His Way Into #1 Spot with The Revenant
Box Office: Ride Along 2 Dethrones Star Wars: The Force Awakens

View All Norm of the North News

Critic Reviews for Norm of the North

Norm of the North is a rancid excursion into well-intentioned animated chaos that proves to be an excruciating endurance test no one of sound mind or body should ever attempt to watch, and that includes their children.

With its strangely adult plot about global warming and real estate development and its mediocre animation style, Norm of the North is one to skip.

The eco-message is rather vague, the villain not particularly villainous, and the jokes fall flat.

For the tots, the film is blandly inoffensive enough to offer some Saturday afternoon entertainment, but this isn't one of those crossover hits that parents can enjoy just as much as their kids.

Has little to recommend it. Padded with dance numbers - two in the first fifteen minutes alone - and montages, the best that can be said is that bad movies like this are important to remind us that the Pixar movies aren't flukes.

Sometimes a film critic has to throw himself or herself on a bomb for the good of the movie-going public.

I really don't have anything good to say about it. I guess congrats for getting a movie made.

In an age where even animated flicks are designed for consumption for the junior and senior of our species, this film somehow manages to take the intelligence of children for granted.

It's a lazy, cheap, nonsensical ploy to separate you from your money.

Audience Reviews for Norm of the North

I have to start off with three things. Number one: don't ask. Number two: Bill Nighy deserves so much fucking better than this. So much more, I'm not even kidding. And, lastly, number three: do you really expect this movie to be any good when ROB SCHNEIDER, of all people, voices the main character. I don't think I'm exaggerating that Rob is, probably, one of the worst comedic actors of the last 20 years. It's not like Chris Rock, where you know that the guy is actually a good stand-up comic, it's just that his track record for picking films haven't been the best. Schneider is just all-around awful and the fact that he's managed to be a success, if it can be called that, just because his friendship with Adam Sandler is one of the great Hollywood tragedies. I'm obviously exaggerating, but if it really wasn't for Adam Sandler throwing this guy bones by giving him roles that are racially insensitive then Rob would have been, rightfully so, forgotten ages ago. With that said, while I thought the voice acting in this film was really substandard, I don't think the film's poor quality can be blamed entirely on the cast. I will admit that they share some of the blame, I'm not gonna deny that, but the story is awfully misguided and genuinely uninteresting and it seems more like an excuse to have sequences where Norm dances for, literally, no reason whatsoever. Or the reason could be that it's a kids' movie and that's what's expected. Not that the film really had much potential to begin with, but it's like they're really not even trying to make a good movie. They're just trying to make something that kids might look at and be amused. Though, with the quality of the animation, which is nonexistent, I can't imagine too many kids really looking at this and thinking that they want to see it because it's colorful and vibrant. Honestly speaking, the animation is terrible. I believe, and I'm confident about this, that the animation in the first Toy Story that came out in 1995, TWENTY-ONE years ago, looks better than this turd. I swear to you that I'm not joking about this. And I realize that that's not a fair comparison. This movie was never gonna have the budget that, even, the original Toy Story did (this movie had an $18 million budget and TS had a $30 million one), much less were they gonna have the budget that Pixar has now. But, and I do think that gives them a slight pass, but not completely. There's just nothing impressive about the animation. It looks generic and uninspired. I'm honestly quite surprised that this movie got, however limited it was, a theatrical release. I can't imagine that Lionsgate believed that they could make a ton of money on this, so why bother putting it out there and spending money on marketing and trailers for a movie that had limited potential for major success. The film does have some moments where it made me chuckle. Like the lemmings playing the violins as the boat they were on was going down. I think it was mostly how unexpected it was as opposed to it being legitimately funny, but it, at least, got a laugh out of me and that's really the only one I can remember. Is this movie worse than Cars 2, Shrek 3, Shark Tale? I guess if you look at the ratings for those respective films when compared to this one, then yes, this would, technically speaking, be a worse movie. Did it have me as fuming as Cars 2 did? No. I know for a fact that I hated Cars 2 more than I hated this film, that much is obvious. Deep down, this is the worst movie, but I didn't come to hate it as much. I mean, don't get me wrong, I thought this movie was legit awful, but it wasn't the type of awful that made me want to pull my hair out. It's just an awful kids' movie. We get man of those a year and this is just one of them. But, yes, with that said, this is still an awful movie that, hopefully, people stay away from. It's just bad, bad, bad.

Not half as bad as most people made out, The story will be a little hard to understand for young children, But beneath the plot is a innocent story that my 4 year old enjoyed even though most of the jokes are twerking polar bears, I can't comment on the 3D as I watched the 2D version, It's nothing memorable or great plus there's much better animations about but you can't knock it for trying something different even if the end result is very under par.

Norm of the North consistently underestimates how smart children can be and settles for a lazy, and rather sexist environmental tale that suffers from dull animation and a slapped together plot. Characters rely on pee jokes, that sort of thing. The message isn't a bad one, but the film delivers it in a loud and unsubtle way. January is characterized by crappy animations and luckily Kung Fu Panda 3 and Zootopia weren't too far behind. A poor way to start 2016 in animation. Rating: 27

It's already safe to say Norm of the North is this year's poorest animated film and we're already beginning the year. I don't need to see it to prove whether it's bad. I just needed to watch the trailer for proof. If you have children, they'll probably love it when the rest of us won't.

Norm of the North Quotes