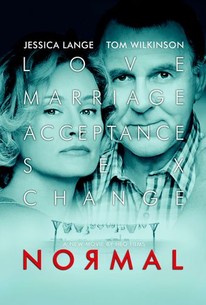 Although undergoing a sex change is not as unusual a procedure as it once was in days gone by, it is still hardly an everyday occurrence -- especially in rural, conservative western Illinois, where Normal takes place. After 25 years of marriage, Roy Applewood (Tom Wilkinson) surprises his wife, Irma (Jessica Lange), by announcing that he'd rather be a woman, and in fact has felt like a woman for most of his adult life. As Roy undergoes the standard hormone and prosthetics process to transform himself into "Ruth," his sudden gender switch elicits shock, surprise, and anger from friends, family members, and co-workers alike -- but also is met with support and sympathy from a number of extremely unlikely sources. Tastefully produced and acted, the film wisely avoids shock value in its subject matter and condescension in its treatment of middle-America types. Directed by Jane Anderson, who also adapted the script from her own stage play +Looking for Normal, the made-for-cable Normal premiered March 16, 2003, on HBO.

Rondi Reed
as Beth
View All

... almost every line of dialogue has at least two meanings, one literal and the other either pop-anthropological or pomo-ironic. And yet Normal, unlike About Schmidt, actually seems to like its characters, and they seem to like each other.

A television event that truly deserves the label.

Story of a middle-aged man preparing to undergo a sex change and of the woman who slowly comes to accept him is rendered with sincerity and restraint by director Jane Anderson.

Anderson's remarkable achievement here is to treat such a sensational subject with such a steady hand.

The film is sprinkled with a bit of humor right up to the charming end when we realize that this is a movie about the strangest things some of us will do for love.

Powerful performance by Wilkinson and a powerhouse performance by Lange (who actually stole the show). This is an very interesting story about a modern issue rarely thought about but nevertheless, profound.

The word NORMAL is relativ

This film was totally unique, well worth a watch if you have an open mind to such subjects