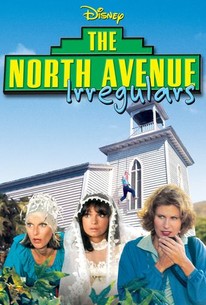 One of the bigger non-cartoon moneymakers for Disney in the 1970s, The North Avenue Irregulars is predicated on the premise of the "Neighborhood Watch" system. Priest Michael Hill (Edward Herrmann), newly arrived on North Avenue, decides to buck the patriarchal notions of his superiors by delegating church responsibilities to the neighborhood women. Since the ladies include Vickie, Jane, Anne, Claire and Rose (Barbara Harris, Karen Valentine, Susan Clark, Cloris Leachman and Patsy Kelly), we're well primed for a surfeit of feistiness. Father Michael entrusts the church funds to Rose, who loses it all at the race track. In trying to retrieve the cash, he comes up against an influential bookie ring, controlled by several of the above-suspicion town officials. The wily priest responds by organizing the ladies of his congregation into the North Avenue Irregulars, a two-fisted crimefighting unit. There's slapstick aplenty within the film's 99 minutes, including the expected comic car crash. North Avenue Irregulars is based on a (drawn-from-life?) novel by the Reverend Albert Fay Hill.

The story is silly and your enjoyment will probably depend on your taste of slapstick but it makes me laugh.

What's irregular is the story and the direction

Let me just start out by saying that I watched this film willingly.....there was a lot of alcohol involved....it was sandwiched in between a session watching the original Evil Dead and Hellraiser, a little arm twisting and some rib nudging but I have to say this was a giggle. Typical late 70's Disney and I did laugh if only at the pants surveillance attempts.