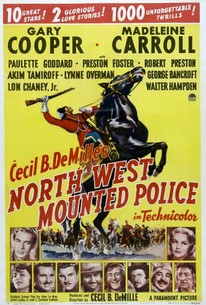 Cecil B. De Mille directed this lavish all-star spectacular paying tribute to America's neighbors to the North. In 1885, as Louis Riel (Francis J. McDonald) tries to organize Indians and French settlers into a fighting force that will battle against the ruling British, Texas Ranger Dusty Rivers (Gary Cooper) arrives in Canada to arrest Jacques Corbeau (George Bancroft), one of Riel's associates who is wanted for murder in the U.S. Rivers promptly falls for nurse April Logan (Madeleine Carroll), which triggers jealously in the straightlaced Mountie sergeant Jim Brett (Preston S. Foster), who is also in love with April. Meanwhile, April's brother, Ronnie Logan (Robert Preston), also a member of the North West Mounted Police, is in love with Louvette (Paulette Goddard), Corbeau's sister and a fiery "half-breed" who lives among the Indians. When Dusty arrives in Canada, he joins forces with the mounties, who are looking for Corbeau on another murder charge, and soon joins the fight against Riel's rebel factions. De Mille imported 300 pine trees for his "forest" set, believing that a woods created on the controlled environment of a soundstage would look more "real" onscreen than location shooting in Canada. ~ Mark Deming, Rovi

Harry Burns
as The Crow

Magnificent scenes, directed with the proverbial mastery of DeMille, that makes the movie, filmed in technicolor, a marvel of art. [Full review in Spanish]

There are no featured reviews for North West Mounted Police at this time.