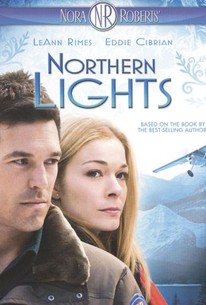 Northern Lights is one of four made-for-TV movies adapted from Nora Roberts' romance novels for the Lifetime channel in 2009 (along with Tribute, High Noon, and Midnight Bayou). Country singer LeAnn Rimes stars as Meg Galligan, an Alaska bush pilot who finds herself falling for her small town's new chief of police, Nate Burns (Eddie Cibrian), a former Baltimore cop haunted by the death of his partner. The couple's relationship is tested when Meg's long-missing father turns up dead in the Alaskan wilderness, leading Nate on a murder investigation that uncovers some unsavory town secrets. This romantic thriller features Rosanna Arquette in a supporting turn as Meg's mother, Charlene.

There are no critic reviews yet for Northern Lights. Keep checking Rotten Tomatoes for updates!

Surprising ending - it was not who I expected it to be.

Mainly watched this one out of curiosity to see if Leann Rimes can actually act. Can she? Well... Kind of. The whole movie is extremely b-grade, so for the feel of it and the level it aims at, I would say yes. For a big screen movie - probably not any time soon! This is a thriller based on a Nora Roberts book. I haven't read this particular one, so I can't say if it's a good adaptation or not. It doesn't especially make me want to run out and read the book either. However, for a tv movie on a boring day, you may find this one acceptable.

Maybe I am not critical enough, but I didn't mind this movie. It has all the normal aspects of a entertainment-type movie. It has mystery as Nate tries to solve a murder; it has the required love-interest between Nate and Meg. It has parades and gun battles - no car chases though. All in all a stock Lifetime-type movie.