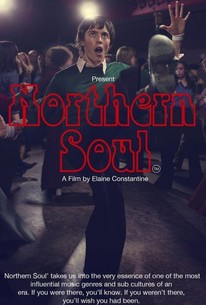 The film tells the tale of two Northern boys whose worlds are changed forever when they discover black American soul music. Northern Soul was phenomenally popular with British youths in the 1970s, taking the North of the country by storm. Northern Soul the film intends to appeal to those generations of fans while attracting a modern audience who can relate to youth culture from another era. If you were there, you'll know. If you weren't there, you'll wish you had been.

Earl Coogan
as Child in Street

Lenny Coogan
as Child in Street

Carlo Santucci
as Child at Window

Madison Wilson
as Child in Street

The Martian is Certified Fresh

The movie is carried by the two hard-dancing leads, whose sweat-soaked strutting demands attention.

Rich in period detail, it's as transportative to the shuffling spins, fashion subculture and euphoric, amphetamine-fuelled all-nighters of 1974 Lancashire and the cult-following DJs of the Wigan Casino as a documentary, turned up to 11.

The film has a ferocious, shaggy energy that mirrors that of the testosterone-, amphetamine- and adrenaline-pumped boys.

Where this movie comes up short is in bringing any kind of real life to its bildungsroman side.

The first feature from writer-director Elaine Constantine, herself a Northern soul veteran, the film follows a fairly familiar innocent-led-astray storyline.

Funny and feisty, gritty and sometimes grim, this first feature from the photographer Elaine Constantine delivers a sweaty snapshot of a very specific time and place.

Sophie WIng
One Room With A View

Elaine Constantine's fictional account of her own experiences is an age-old tale of friendship forged through shared passions, but it's told with heart and a dogged determination to document the time.

Buy the soundtrack. Avoid this film.

Disaffected youth and music go together like - well, there's actually no better simile. So how else to describe British director Elaine Constantine's first film? For one thing, it's got a well-defined sense of place and time.

The cast is mostly made of newcomers, and they are very good indeed.

A really engrossing look at how US soul music reached the UK in the 70's and the scene that accompanied it. Great performances from the well known actors but the main actors who are not that well known, along with the superb soundtrack, really steal the show and keep you watching.