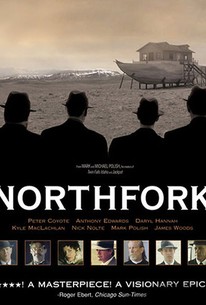 Critics Consensus: Visually poetic, but may be too dramatically inert for some.

Critics Consensus: Visually poetic, but may be too dramatically inert for some.

Critic Consensus: Visually poetic, but may be too dramatically inert for some.

What was once a brave frontier town has become a haven for enlightened oddballs in this unusual drama from director Michael Polish, written in collaboration with his twin brother, Mark Polish. Northfork is a small town in Montana which, in 1955, is soon to disappear in the name of progress; a massive hydroelectric dam is to be put in nearby, which will flood the entire village. A group of six men sent by the power company -- led by Walter O'Brien (James Woods) and his son Willis (Mark Polish) -- arrive in Northfork to evacuate the few remaining residents. If the men are successful, they'll each be given parcels of land on the banks of the new lake which will be where Northfork once stood. Most of the townspeople have already left, but a few remain, among them Father Harlan (Nick Nolte), a man of the cloth who is caring for Irwin (Duel Farnes), a strange, scarred boy apparently on his deathbed, and a handful of enchanted eccentrics who have taken over a local bar, including Flower Hercules (Daryl Hannah), Cup of Tea (Robin Sachs), Happy (Anthony Edwards), and Cod (Ben Foster). As Walter and Willis try to persuade the stubborn stragglers to move on, Walter must search for a new final resting place for his late wife, whose coffin is the last to be relocated after Northfork's cemetery is dug up. Northfork received its world premier at the 2003 Sundance Film Festival.

Robin Sachs
as Cup of Tea

Saralyn Sebern
as Mrs. Stalling No.1

Ginny Watts
as Mrs. Stalling No.2

Funny and alive and visually delightful.

The jokey elements are artificial, and strike a note of banality that undermines whatever sense of transcendence the film might be attempting in its stark, sweeping cinematography and mystical, dreamy milieu.

For me, the Polish brothers marched down a road leading nowhere.

A compelling juxtaposition of the poignant and the bizarre, a movie that tosses moviemaking rules into the nearest Cuisinart.

For those on its peculiar wavelength, everything fits. For those who aren't, it's a painful piece of self-impressed drivel. Either way, you'll know you've been to the movies.

It's a tone poem of a movie, more visual than coherent. As such, what it's about is less important than the spell it casts.

...a transcendent tone poem, an arrangement in dun and gray marred only slightly by the brothers' insistence on the occasional tin-ear joke

A moody and layered meditation on and evocation of literal and figurative states of purgatory.

With the pacing of a death march and the theological heft of Angels in the Outfield, this feel-bad extravaganza is 2003's Exhibit A of why people avoid arthouse cinema.

It's a recipe for magical realism, and the Polish brothers deliver with a stunning cinematic statement.

This droll surrealistic fantasy is like a gentler David Lynch hallucination.

Characters talk in solemn monotones, as if the entire drama were taking place in a funeral parlor.

In 1955, officials try to convince reluctant residents of Northfork, Montana (one of who has built an ark) to leave before the town is flooded by new dam construction; meanwhile, a dying orphan meets a ghostly family and tries to convince them to take him with them. The mildly surreal Big Sky spirituality here may be too dry to inspire as intended, but it does set a unique and thoughtful mood.

What the Hell was I watching. Two Stars

"There's nothing fowl about these wings"