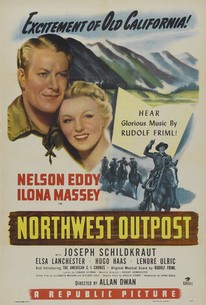 Backed by the "American GI Chorus", Nelson Eddy made his final screen appearance in the unusually elaborate Republic musical Northwest Outpost. The story is set in the 1830s, when a good portion of California was owned by Russia. US cavalry officer James Laurence (Nelson Eddy) arrives at one of the Russian colonies to pave the way for the eventual American takeover of the territory. He faces resistance in the form of Prince Nikolai Balinin (Hugo Haas), who has no intention of weakening his despotic hold over the local peasants. The plot thickens when Laurence falls in love with Natalie Alanova (Ilona Massey), the wife of disgraced nobleman Count Igor Savin (Joseph Schildkraut). The script draws several unsubtle parallels between Russian California of 1830 and Communist Russia of 1947, but this can be chalked up to the political tenor of the times. Rudolf Friml's soaring musical score evokes fond memories of Friml's earlier Rose Marie, which of course also starred Nelson Eddy.

This was the last time on the 'big screen' for the popular Nelson Eddy, in this forgettable fluff western operetta.

There are no featured audience reviews yet. Click the link below to see what others say about Northwest Outpost!