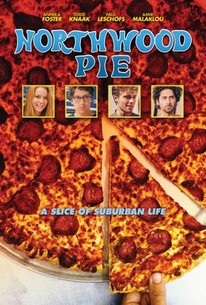 Community college burn out in the making, Crispin, spends the majority of his time stuck on repeat with his long-time group of friends. But a newfound desire to move out of his suburban hometown prompts him to land a job at the local, rundown Northwood Pizza. There he meets a group of employees as attached to their jobs as Crispin's friends' are their city--including Sierra, a girl whose musings lie deeper than most. Through his experiences with his friends, coworkers, and kindling relationship, Crispin learns to embrace his higher ambitions.

The movie charts a course between laconic, sardonic and apocryphal embellishments. When Salahi and Knaak stay in the Linklater-esque suburban malaise with the Smith-esque flourishes of unexpected sincerity, "Northwood Pie" absolutely delivers.

It's hard to figure out who the target audience for indie Northwood Pie is.

Northwood Pie is one of those small projects that wouldn't seem destined for greatness but manages to surprise for a sweet look at suburban youth.

Salahi proves to be a highly-capable filmmaker, as the movie is incredibly well shot for a film made with less money than the craft-services budget for a Marvel movie.

A likeable hangout comedy that succeeds thanks to its engaging performances.

Nothing new here, but it's well-intentioned and well made for what it is.

Whether you grew up in this type of community or not, many of the characters will certainly feel familiar to you as people you've known for decades or have just come breezing into your life.

Aramide Tinubu
A Word with Aramide

Credit young director and co-writer Jay Salahi for finding where the real truths lie in his feature film debut instead of peppering a "Pie" with ingredients an audience might think taste better brainless.

the main problem was the script that just wasn't funny and seemed to think the f-word is an excuse for a joke, which gets old fast

A very entertaining, but "down to earth" comedy that increases confidence in indie cinema.

There are no featured reviews for Northwood Pie at this time.