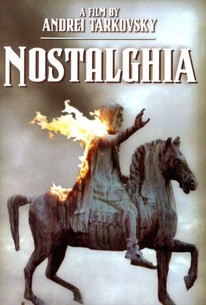 Nostalghia is Russian director Andrei Tarkovsky's enigmatic work about a writer (Oleg Yankovsky) who, trapped by his fame and an unhappy marriage, seeks out his cultural past in Italy. Here he meets Erland Josephson, a local pariah who declares that the world is coming to an end. The writer finds this prophecy curiously more alluring than the possibility of a dead-end future. Nostalghia won the Grand Prix de Creation and the International Critics Prize at the 1984 Cannes Film Festival. ~ Hal Erickson, Rovi

Stick with it. There are shocking acts that rupture the stillness, and then there's one of cinema's great endings, a wrenching, rapturous scene that would set both of those poets into embarrassed rewrites.

Aims for a hushed, hypnotic, incantatory effect, and it does succeed in inducing some kind of trance.

Just as Tarkovsky used deep space to explore psychological space in Solaris, here, he's using an estranging, sepia-toned Tuscany to express the dimensions of the soul.

Perhaps Andrei Tarkovsky's most opaque film, Nostalghia is nonetheless one of his most personal.

It's a mood piece that makes you feel like you're drowning in high-grade art swill. If that sounds oppressive, know that it is, but the tonic is invigorating: a clammy atmosphere so unlike the airless options Hollywood's about to spring on us.

As the title indicates, Nostalghia is a place of mind rather than a film, a thing of everlasting beauty.

What results is a work of devastating beauty just ripe for the GIFing.

Tarkovsky's most emotionally accessible film, and the final no-two-ways-about-it masterpiece of his extraordinary career.

...the film seems positively out of place compared with the two decades long string of challenging masterworks that preceded it.

Almost seemed to be anticipating Tarkovsky's own demise with its strange sensibility of apocalyptic proselytising juxtaposed with a more soothing, balming, elegiac tone.

...transports us to a place that no longer feels temporal, but spiritual.

Away from his homeland Russia, Tarkovsky delivered this phenomenal masterpiece, a wonderfully directed film that boasts a most gorgeous cinematography and takes us in a beautiful journey through nostalgia, faith, frustration and a man's longing to find his own path.

A fine picture directed by Russian filmmaker Andrei Tarkovsky, Nostalghia is a well crafted picture that should definitely appeal to fans of his work, this is a powerful picture one that is captivating from the first frame right up to the end, and it does it very well due to a strong sense of wonderful storytelling combined with powerful performances. The elements that make for a great Tarkovsky picture here, and he does great work behind the camera. The story is as usual simple, but Andrei Tarkovsky pulls it off very well due to a great visual style, which has always elevated his picture to fine art. Only a select few of filmmakers have delivered films like Tarkovsky has, and here with Nostalghia he crafts something quite good, and well worth seeing if you enjoy his work. The film is very good, and it is engaging from start to finish. Tarkovsky always manages to convey a sense of surrealism to every one of his movies, and here we have a film that shows us an eccentric, yet brilliant plot that stands out due to Tarkovsky's impeccable filmmaking. I've been a great admirer of his work, and he is able to craft something truly unique with each of his films and here he crafts something very good and is a must if you've enjoyed his work. Nostalghia is a fine drama that captivates from start to finish; this is a well crafted affair that is engaging, thought provoking and memorable from start to finish. Andrei Tarkovsky has never made a bad film or a mediocre movie, he was a filmmaker that honed his craft and expertly made terrific works of cinema, and if you're looking for a very good drama to watch, you'll find what you're looking for in this film.

A Russian poet in Italy researching a biography of a Russian composer experiences homesickness and ennui, and is asked to perform a ritual by a madman. Be warned: it's extremely slow-paced and dreamlike, including an almost 9 miute sequence of a man carrying a candle; but Tarkovsky's visual sense and ability to evoke a peculiar mood is unequalled, and will reward the patient viewer with a powerful cinematic experience.