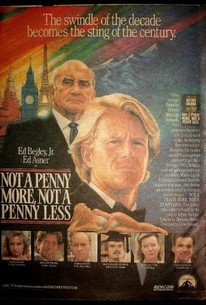 This made-for-cable feature film stars Edward Asner as a fashionable confidence trickster. Asner masterminds an investment scam which cleans out four gullible young men. The foursome pool their resources and decide to beat Asner at his own game with a con of their own. Jenny Agutter is the lovely bait used by the victims to trap the seemingly susceptible crook. Originally shown in two two-hour installments, Not a Penny More, Not a Penny Less had some surface stylishness thanks to director Clive Donner; unfortunately, there's hardly enough story to fill up even 90 of the film's 200 minutes.

There are no critic reviews yet for Not a Penny More, Not a Penny Less. Keep checking Rotten Tomatoes for updates!