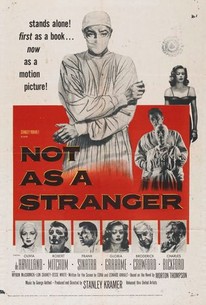 Ambitious but impecunious medical student Lucas Marsh (Robert Mitchum) marries the older and (in this film, at least) not especially attractive Kristina Hedvigson (Olivia de Havilland) so that she can pay his tuition fees. Kristina loves Lucas, but he loves nothing but his work. Emotionally shutting himself off from everyone -- including best friend, Alfred Boone (Frank Sinatra), and drunken dad, Job Marsh (Lon Chaney Jr.) -- Lucas survives his training and goes to work as the assistant to tough but tender small-town medico Dr. Runkleman (Charles Bickford). He enters into an affair with wealthy Harriet Lang (Gloria Grahame) (watch for the symbolism-laden tryst in the horse barn!), obliging Alfred, now a big-city doctor, to try to patch up his pal's marriage. But Lucas feels nothing and needs no one because he's come to think of himself as the perfect physician, incapable of making an error. When Lucas fails to revive his mentor Dr. Runkleman during heart surgery (a genuine heart is used in the "massage" close-ups), the young doctor suddenly realizes that he's not infallible after all. He wanders aimlessly through town, finally returning to his wife and collapsing into her arms, sobbing "Help me! Please help me!" Cameo players range from Broderick Crawford as a Jewish doctor denied entry into medicine's upper circles to Carl Switzer as a bug-eyed patient. The film was adapted from the best-selling novel by Morton Thompson. ~ Hal Erickson, Rovi

William Vedder
as Emmons
View All

Though some scenes come off fairly well, Mitchum is poker-faced from start to finish.

With so much dissecting in his picture -- and so much of it being good -- it is too bad that Mr. Kramer couldn't have done a little on his characters.

The exceptional cast helps to while away the platitudes and pieties, provided you can accept the likes of Mitchum, Sinatra and Marvin as somewhat wrinkly students.

This is clearly a beginning film for Kramer, who doesn't seem concerned with the idea of pacing.

When the final moments of the movie wind down and Marsh finally fully hits the wall and Mitchum finally dissolves, it's startling and heart-wrenching.