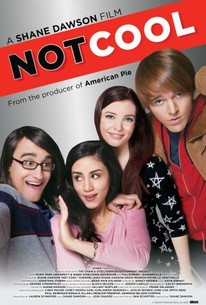 NOT COOL follows former prom king and college freshman Scott (Shane Dawson) who has just returned home for Thanksgiving break only to be dumped by his eccentric, long-term girlfriend. With his world turned upside down, Scott strikes an unlikely friendship with former classmate Tori (Cherami Leigh), an ugly duckling who blossomed in her first semester of college. Together, the two embark on an outrageous adventure through their hometown. But when Scott and Tori find their friendship turning into something deeper, they realize that a few months away may have changed them more than they realized. (C) Starz

Critic Reviews for Not Cool

A stab - no, a frantic machete swipe - at comedy that only date-rapists, racists and sociopaths could love ...

No one involved with it should ever be allowed to work in the movies again.

It's shock value (drugs, sex, bodily fluids, and a lot of yelling) over any semblance of cleverness.

Sometimes the movie is funny, other times eye-roll inducing.

Excrement-obsessed, with creepy characters played more broadly than in a silent comedy, the appropriately titled Not Cool oozes with vulgarity for its own sake before turning to rom-com cliche sentimentality.

Audience Reviews for Not Cool

plays like a david wain film but can't stick the landing. I laughed a little but there is more misses than successes. looking forward to hollidaysburg to see the dramatic version of the same script.

I always like to support YouTubers when they get a shot at doing something they love. Unfortunately this was a big opportunity wasted with cheap jokes and an unnecessary story. The hour and a half that it lasts never seemed to end. One of the biggest problems I had with the film is Shane Dawson himself starring in it. The direction was decent but his cartoony overacting made me forget that I was actually watching a full production backed by hundreds of people. Actually, one of the very few funny bits for me was when he actually referenced one of the characters from his YouTube videos. He cant' seem to fully grow up and detach that "online persona" from this production that has nothing to with his YouTube career. The stupid jokes have to stop. The other big problem that I have with this movie is the generational problem. I doesn't seem to know who its target is. While this clearly would be rated R, the problems and whining presented in the film seemed a little too teeny for me. Kids these days wouldn't even get the Degrassi reference, even if you tell them - and you did. Prom king? Name calling? This is like a Disney Channel movie with the wrong director. Maybe not going the over the top funny would've considerably helped more. I also don't appreciate the blatant product placement halfway through the movie, that for a moment seemed like a complete 2 minute commercial for the Dance Central game. On a final note, I don't know how much control Dawson had over the story, so on that, part it's not his fault - I'll just have to see how Hollidaysburg turns out.