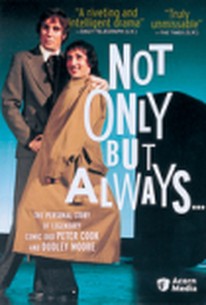 Not Only But Always Photos

The turbulent collaboration between legendary British comedy duo Dudley Moore and Peter Cook is explored in this biographical feature that traces the career of the pair from their early days in the groundbreaking Beyond the Fringe comedy troupe to their later status as foul-mouthed filth kings Derek and Clive. From the moment Moore (Aidan McArdle) and Cook (Rhys Ifans) met as undergraduate students, their comic sensibilities were perfectly intertwined. Though in public their remarkable wit and uncanny sense of timing would gain the pair international acclaim, when the bright lights of the stage went dim, Cook and Moore were burning from the inside with bitter resentment. ~ Jason Buchanan, Rovi

Critic Reviews for Not Only But Always

Ifans and McArdle disappear and become the men they portray.

Audience Reviews for Not Only But Always

This true-to-life dramatization of the comedy double act Peter Cook and Dudley Moore is notable mainly for Rhys Ifans' remarkable performance. He IS Peter Cook! The witty and insightful script is full of his characteristically surreal barbs and satire, and shows the behind the scenes squabbling and resentments that show that once again, genius and madness seem to go hand in hand. The post-modern device of having a black and white Pete and Dud commentating on the story is more annoying than amusing, but otherwise, a fine bio pic.

Not Only But Always Quotes