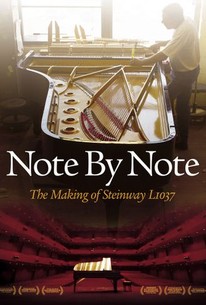 Note by Note: The Making of Steinway L1037 Photos

While in the 21st century many musical instruments are mass-produced on an assembly line, at the Steinway Factory in Queens, NY, grand pianos are still made largely by hand, much as they were centuries before, and each piano develops a tonal personality very much its own as it slowly takes shape in the hands of expert craftsmen. Note by Note: The Making of Steinway L1037 is a documentary from filmmaker Ben Niles that follows the meticulous process of creating one of these remarkable instruments, from the harvesting of the wood in the Pacific Northwest to the final touches before the piano is sent to the sales floor of a music store. Along the way, Niles talks to many of the people who have had a hand in the making of this piano, as well as those who later hear music being performed on the instrument. Note by Note was screened in competition at the 2007 Silverdocs Film Festival, a competition founded by the American Film Institute and the Discovery Channel.

Critic Reviews for Note by Note: The Making of Steinway L1037

Like an elegant set of theme and variations, director Ben Niles' beautiful, probing documentary about music and craftsmanship takes a simple idea and follows it in a number of directions.

The story of one piano is a microcosm of art, commerce, perfectionism and the American dream in a thorough, but repetitive, documentary.

This narrative gambit allows Niles to score a quiet but stunning rhetorical point: in their meticulous attention to detail, the blue-collar workers who've spent their lives at the plant seem just as artistic as any musician.

It's inspirational to watch and listen as the Steinway employees demonstrate with pride their part in producing an instrument that will sell for more than $100,000 and may succeed some of its brethren on the stage at Carnegie Hall.

A modestly scaled but enjoyable documentary.

A fascinating documentary that more than just piano lovers can enjoy.

... an engrossing film that makes the process of crafting a piano and the people involved come alive.

With its precise editing and thoughtful storytelling, 'Note by Note' is a celebration of craftsmanship - of a piano and of film.

Note By Note: The Making of Steinway L1307 doesn't need any cameos by celebrities, musical or otherwise, to hold our interest.

Note by Note is a reminder of the deep working class roots of high culture.

Although Note by Note has the qualities of an industrial or promotional film, it also is a lovely and lyrical look at a labor of love.

A slimy log dumped into frigid Alaskan waters emerges as the hand-selected Steinway for a world-class performance. A fascinating look at the mini-city within New York City where hand work still prevails.

Audience Reviews for Note by Note: The Making of Steinway L1037

"Note by Note: The Making of the Steinway L1037" is a slight documentary that functions as a de facto factory tour as it follows the making of a concert piano from the selection of lumber in Alaska to the finished product at the Steinway factory in Astoria, Queens. Sadly, there is little history(at least, I know how Steinway Street got its name now). Instead, the documentary takes a broad approach by being more about Queens, and its reputation as a multicultural borough where the pianos are made by a diverse group of people, both neighborhood guys and immigrants, contrasted with Manhattan, where the pianos, outside the price range of the craftsmen, are on display at the store at the corner of 57th Street and Sixth Avenue for potential customers. All of whom are united by music that they all help to create.

Note by Note: The Making of Steinway L1037 Quotes