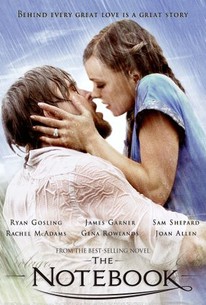 Critics Consensus: It's hard not to admire its unabashed sentimentality, but The Notebook is too clumsily manipulative to rise above its melodramatic clichés.

Critics Consensus: It's hard not to admire its unabashed sentimentality, but The Notebook is too clumsily manipulative to rise above its melodramatic clichés.

Critic Consensus: It's hard not to admire its unabashed sentimentality, but The Notebook is too clumsily manipulative to rise above its melodramatic clichés.

Directed by Nick Cassavetes, this adaptation of author Nicholas Sparks' bestselling novel revolves around Noah Calhoun's (James Garner) regular visits to a female patron (Gena Rowlands) of an area nursing home. Rather than bore her with the inanities of everyday life, Calhoun reads from an old, faded notebook containing the sweeping account of a young couple (Ryan Gosling and Rachel McAdams) whose love affair was tragically put to a halt after their separation in the midst of World War II. Seven years later, the couple was reunited, and, despite having taken radically different paths, they found themselves unable to resist the call of a second chance. The Notebook also features Joan Allen, Sam Shepard, and Kevin Connolly. ~ Tracie Cooper, Rovi

Renée Amber
as Nurse At Counter

John A. Cundari
as Maitre D'

Hugh A. Robertson
as Pastor

Robert Fraisse
as Buyer No. 1

Barbara Weetman
as Buyer No. 2

Dan Chamblin
as Buyer No. 3

Sasha Azevedo
as Wife of Buyer No. 3

News & Interviews for The Notebook

View All The Notebook News

Critic Reviews for The Notebook

A honey-dipped love story with a surprisingly tart aftertaste, The Notebook is a better-than-you'd-expect adaptation of Nicholas Sparks's bestselling novel of the same name.

In a romance where paradise is a duck-filled pond, it helps to be mild-mannered.

Dentistry in the Renaissance could not have been more painful than watching this.

It's no secret that Mr. Gosling is one of our most gifted young actors. Still, this is his first romantic lead, and he's superb -- interesting in his inwardness, endearing in his demonstrativeness.

The connection between the two narratives is supposed to be a big, heartbreaking surprise, though I figured it out well in advance and spent the interim unfavorably comparing this greatest-generation hanky wringer to the British drama Iris.

Amid the sticky-sweet swamp of Jeremy Leven's script, Rowlands and Garner emerge spotless and beatific, lending a near-miraculous credibility to their scenes together.

Though torn between two storylines, one of which vastly outshines the other, "The Notebook" is still an impressive production.

Intelligently adapted and written by Jan Sardi, this is the tear-jerker of the summer. A chick flick? Yes. Classic Hollywood romance? Yes. Will it touch your heart? Without a doubt...

James Garner and Gena Rowlands lend the story a graceful gravity that perhaps the rest of the film's more simplistic romanticism doesn't deserve.

Never quite escapes the been-there-done-that feeling of Hollywood romantic cliché with sunny photography and perfectly tailored costumes to boot.

Frank Capra would be proud of the way Nick Cassavetes pulls at the heart strings... Have tissues at the ready.

The Notebook is premium romantic schlock and confirms director Nick Cassavetes (Rowlands' son) as a specialist in the genre after John Q in 2002.

Audience Reviews for The Notebook

If you are an old romantic person at heart then you'll love this movie. A deeply movie yet boring love story.

Although this movie has accrued much acclaim by critics and fans alike since its release, it has yielded no positive impact on the world of film or society in general. It has led a generation of young women to believe that there is a Noah for all of us, and we deserve to be just as "misunderstood and rebellious" as Allie. "The Notebook", along with other popular rom-coms, has left most girls with a muddled line between fiction and reality. Though Nicholas Sparks may be talented as a fiction writer, it is only because he knows how to manipulate the female mind into an emotional puddle. Aside from the beautiful Southern setting (a Sparks trademark) and Ryan Gosling occasionally sweaty and shirtless, this movie provided not only no relatability for me, but also did not provide even a fictitious escape. 1/2 Star Updated 09-28-13

I'm not one for soppy romantic movies but this one pulls at the heart strings. An older gentlemen reads a story to an elderly lady in a nursing home. The story is about two teenagers Noah and Allie who meet one summer and fall in love. Allie's parents are well to do and Noah is poor. They fell out and Allie's parents send her away to school and they don't see each other for years. Noah writes to her every day for a year but there is no response. They try to move on with their lives but something draws them back to each other and they pick up where they left off. It reminds me of 'Fried Green Tomatoes', there are good and bad things that happen but it all comes good in the end. Excellent cast and story. Ryan and Rachel make a good on screen and off screen couple. Kevin Connolly plays Fin, Noah's best buddy. James Marsden plays Allie's dashing new society beau.

The adaptation of Nicholas Sparks' novel is possibly the best interpretation of all. Gosling and McAdams really make the film better than anyone expected. The visualization from Nick Cassavetes places this film atop one of the most memorable, cult-like, romance films of all time. 4.5/5