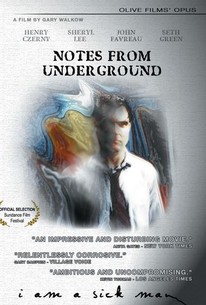 This adaptation of Dostoevsky's novella does an exceptional job of retaining the multi-textured richness of the original story about the intimate thoughts of an anonymous lonely building inspector known only as the Underground Man. Everything about the misanthropic civil servant is dull and unpleasant. His job is boring and his only joy comes in using bureaucracy to spitefully torment contractors and architects who despise him. Realizing that he has no friends, the Underground Man does try to ingratiate himself with acquaintances and only ends up even more lonely and bitter. It does not help that he believes himself intellectually superior to those he encounters. He gets involved with a prostitute, Liza, whom he sees at a local brothel. His relationship with her is as complex as he is. On one hand he inflicts his seething rage and the pain of his isolation upon her; on the other, he cares about her and wants to help her escape her sordid situation. He decides to take her to his home, but once she is there, he finds that he is unable to overcome his misanthropy and ends up making her even more miserable. ~ Sandra Brennan, Rovi

Henry Czerny
as The Underground Man

Critic Reviews for Notes From Underground

There are no critic reviews yet for Notes From Underground. Keep checking Rotten Tomatoes for updates!

Audience Reviews for Notes From Underground

There are no featured audience reviews yet. Click the link below to see what others say about Notes From Underground!