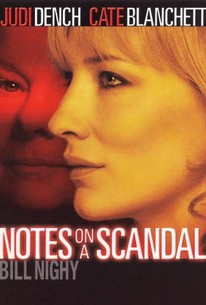 Critics Consensus: In this sharp psychological thriller, Judi Dench and Cate Blanchett give fierce, memorable performances as two schoolteachers locked in a battle of wits.

Critics Consensus: In this sharp psychological thriller, Judi Dench and Cate Blanchett give fierce, memorable performances as two schoolteachers locked in a battle of wits.

Critic Consensus: In this sharp psychological thriller, Judi Dench and Cate Blanchett give fierce, memorable performances as two schoolteachers locked in a battle of wits.

Notes on a Scandal Photos

Two women, caught up in a drama of need and betrayal, are at the heart of the psychological thriller "Notes on a Scandal." The twists and turns of the story are noted in the acerbic diary of Barbara Covett, a domineering and solitary teacher who rules with an iron fist over her classroom at a decaying state-run secondary school in London. Save for her cat, Portia, Barbara lives alone, without friends or confidantes--but her world changes when she meets the school's new art teacher, Sheba Hart. Sheba appears to be the kindred spirit and loyal friend Barbara has always been seeking. But, when she discovers that Sheba is having an incendiary affair with one of her young students, their budding relationship takes an ominous turn. Now, as Barbara threatens to expose Sheba's terrible secret to both her husband and the world, Barbara's own secrets and dark obsessions come tumbling to the fore, exposing the deceptions at the core of each of the women's lives.

News & Interviews for Notes on a Scandal

View All Notes on a Scandal News

Critic Reviews for Notes on a Scandal

Smart and brash, it's a picture Bette Davis and Joan Crawford would have killed (preferably each other) to be in.

That's the wonder of the film: it's about the vicious power of loneliness, played out through a story of two women in love. The tragedy, for both of them, is that it's not with each other.

Blanchett has also recently appeared in The Good German and Babel, but this represents far and away her best work.

Richard Eyre directs the film like a chamber play. He leans on Philip Glass's ever-present and insistent music like a crutch. But his natural gift for framing scenes is terrifically assured. A potent and evil pleasure.

Notes on a Scandal is about something deeply unlovely in human nature rarely explored by poets, or novelists, or film-makers: the explosive combination of desire and social envy.

Despite the trope of the predatory lesbian being the engine behind its plot, Notes on a Scandal is delicious fun. A most enjoyable entry into the hagsploitation genre with serious art house credentials.

Dench is compelling, and offers a transcendent portrait of a sociopath, whose bitter, fantasy-inflected interaction with the outside world is informed by a colossal solipsism.

A sharp, intelligent thriller whose thrills come not from car chases or shootouts - but from the power of words; glorious, unabashedly brutal words.

The strength of the writing, and therefore the directing, is that it sees the scandal as a minor point in a human experience that is naturally corrupt, and cares more about how those on the inside choose to deal with their realities.

Stages the story with a tastefulness both ponderous and dishonest

Audience Reviews for Notes on a Scandal

Notes on a Scandal is a near flawless film with stellar acting that will keep the viewer on the edge of his seat. The film has a phenomenal cast that makes this film an incredible cinematic experience. Cate Blanchett and Judi Dench are incredible in their respective roles. Notes on a Scandal is superior drama film that might divide the viewers due to its subject matter. A new art teacher at a school is suspected to having a sexual affair with a fellow student by an elderly teacher, Barbara (Judi Dench) that there's an affair going on between the new teacher, Sheba Hart (Cate Blanchett). I thought that Notes on a Scandal was a terrific film, and the acting displayed on screen by Dench and Blanchett is what makes this film a unique viewing experience. Both actresses are accomplished and have incredible talent, and seeing that talent comes through is really what makes this film worth watching. Notes on a Scandal is a well made film with phenomenal acting and despite its somewhat controversial subject is a great story as well. The film works because of the great acting that the lead actresses display on screen, and though uneven at times, Notes on a Scandal is still a solid enough thriller to enjoy with plenty of tricks up its sleeves.

Wonderful performances all around, with an outstanding and eerie performance from Judy Dench. This film is cleverly put together to contain a very controversial subject and yet the attention is drawn far more to the sub-topic of the relationship between Dench and Blanchett's characters. Left me with a feeling of wanting to shake off the eerie, creepy feel.

"People trust me with their secrets. But who do I trust with mine? You, only you." A veteran high school teacher befriends a younger art teacher, who is having an affair with one of her 15-year-old students. However, her intentions with this new "friend" also go well beyond platonic friendship.

REVIEW
Dench is excellent as a lonely, delusional old teacher who tries to emotionally blackmail a colleague who's having an affair with a student. Blanchett is equally good as the teacher who has the scandalous affair at the risk of losing her family. The film has the benefit of a good script, a fine score by Glass, and the steady direction of Eyre, a veteran of British TV. Dench's true character is revealed slowly, allowing the tension to build, including a compelling scene where she forces Blanchett to make a decision that could have dire consequences. In a role that could easily have become a caricature, Dench delivers a finely controlled performance.

I got very little out of this movie. Tired, obvious subject, played for melodrama, poorly. Philip Glass score was just too up-front.

Notes on a Scandal Quotes