Notes on an Appearance2018 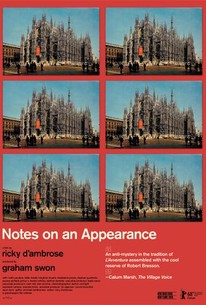 Notes on an Appearance Videos

Notes on an Appearance Photos

A young man's disappearance is at the center of an enigmatic, haunted film set inside New York City apartments, subway stations, bookstores, and cafés as the supporters of an elusive political theorist embark on a covert program of indiscriminate violence and censure. But Todd and Madeleine, who search for the missing David, soon enter the company of strangers promising diversion and intrigue, and the reasons for David's disappearance become much less preoccupying - and less meaningful.

Bingham Bryant
as David
View All

Critic Reviews for Notes on an Appearance

We're in deep, art house territory, but not without a sense of humor.

D'Ambrose conjures a vast imaginary world of intellectual intrigue in tiny, antic touches, which provide the context for a febrile drama of youthful ambition and frustration.

If Mr. D'Ambrose doesn't quite earn his pretensions, it's refreshing to see a filmmaker thinking so far outside the box.

Notes on an Appearance relays a narrative teeming with incident - death, disappearance - through an elusive yet methodical style.

Outwardly the film comes off as a fussy exercise, holding emotion as well as spectacle at bay. Within the academic approach, however, is a desire for purity which has its apocalyptic side.

This tale of a young man who goes missing in Brooklyn has some intriguing moments and a unique visual style, but it proves far too elliptical to be of much more than academic interest.

By emphasizing the banality of everyday life, even when events are extreme, D'Ambrose achieves the paradoxical feat of making an hour-long film .. both slow and action-packed.

A strange, concise and intelligent film. [Full Review in Spanish]

D'Ambrose is clearly a filmmaker to watch, whose ideas and musings, much like Bresson's, are inexorably tied to film form in such a way that finds emotional truth through stylistic distance

Despite [its] flaws, Notes on an Appearance illustrates a confident director who leans heavily on his own idiosyncratic style, something that can't be faulted too much.

"Notes on an Appearance" feels constructed like a maze with no exit.

There are no featured reviews for Notes on an Appearance at this time.

Notes on an Appearance Quotes