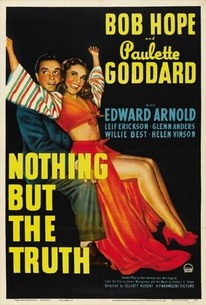 In this version of the oft-filmed stage play by James Montgomery, Nothing But the Truth stars Bob Hope as an up and coming young stockbroker working in Florida. He makes a bet with his coworkers that he can tell nothing but the absolute truth for 24 hours, and the other bettors are determined to keep tabs on him to make sure he doesn't falter. The rest of the action takes place aboard a yacht, where Hope's undiplomatic truthfulness gets him into hot water with a wealthy client, several other influential people, and his girl friend (Paulette Goddard). Hope's coworkers contrive to trick Hope into losing his wager, but African-American valet Willie Best foils their scheme. The picture ends with Hope having to explain his curious behavior for the past 24 hours without offending anyone (P.S.: he pulls it off). Nothing But the Truth was Paramount's third Bob Hope/Paulette Goddard costarring effort, all three based on past stage successes. The film lay unseen for years after its 1941 release due to legal tangles, but was finally made available again through the auspices of film historian Leonard Maltin in the early 1980s. ~ Hal Erickson, Rovi

Critic Reviews for Nothing But the Truth

A lesser known Bob Hope outing that's nevertheless one of his most uproarious efforts.

There are no featured reviews for Nothing But the Truth at this time.

Nothing But the Truth Quotes