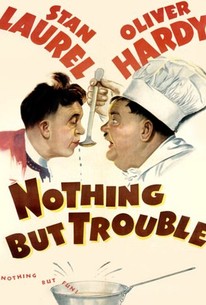 Nothing but Trouble Photos

The second of Laurel & Hardy's two MGM starring films, Nothing But Trouble casts Stan and Ollie as, respectively, an unemployed butler and chef. Despite their inherent ineptitude, there's a wartime servant shortage, so the boys are hired by flighty dowager Mrs. Hawkley (Mary Boland), who hopes to impress visiting dignitaries from the kingdom of Orlandia. While purchasing food for Mrs. Hawkley's dinner party, Stan and Ollie meet a likeable child named Chris (David Leland) - who unbeknownst to them is Orlandia's young monarch-in-exile King Christopher. The boy's uncle, Prince Saul (Philip Merivale), intends to assassinate Chris and take the throne for himself, so the bumbling twosome set out on an improbable rescue mission to save Chris from the Prince's evil clutches.

Chester Clute
as Doolittle
View All

Critic Reviews for Nothing but Trouble

There are no critic reviews yet for Nothing but Trouble. Keep checking Rotten Tomatoes for updates!

Audience Reviews for Nothing but Trouble

Predictable and slightly sentimental, but there are some funny scenes.

Nothing but Trouble Quotes