Nothing Left to Fear2013 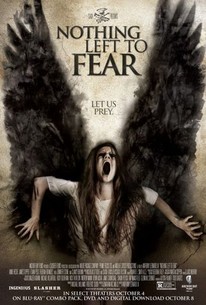 Nothing Left to Fear Photos

NOTHING LEFT TO FEAR was inspired by the legend of Stull, Kansas. Wendy (Anne Heche), her husband Dan (James Tupper of "Revenge") and their kids have just moved to the small town of Stull, Kansas, where Dan is the new pastor. But in this sleepy community of friendly neighbors, a horrific series of occurrences awaits them: Their teenage daughter (Rebekah Brandes of Bellflower) is being tormented by grisly visions. Her younger sister (Jennifer Stone of "Wizards Of Waverly Place") has been marked for a depraved ritual. And deep within the heartland darkness, one of The Seven Gates Of Hell demands the blood of the innocent to unleash the creatures of the damned. Ethan Peck ("10 Things I Hate About You") and Clancy Brown (The Shawshank Redemption) co-star in this demonic shocker featuring original music by producer SLASH and inspired by the real-life paranormal legacy of Stull. NOTHING LEFT TO FEAR was written by Jonathon W.C. Mills and directed by Anthony Leonardi III. (c) Official Facebook

Critic Reviews for Nothing Left to Fear

a far better remake of The Wicker Man (1973) than its official 2006 iteration, as well as a complicated discourse on the contradictions to be found in faith, superstition and the easy manipulation of both,

When a family is as generic as the Bramfords, you get a little antsy waiting for them to be killed off one by one.

Deploys zero humor or wit before moving straight to the sacrificing of a teen girl (always, it's a girl).

The familiar special effects are not the most disappointing element here. It's the squandering of the talented Ms. Heche, who is given top billing but almost nothing to do.

"Nothing Left to Fear" is true to its title. Director Anthony Leonardi III and writer Jonathan Mills have let not one scary moment on screen.

It's a mind numbing, and amateurishly directed horror outing...

Nothing Left To Fear benefits from a genuinely creepy atmosphere in its first half and from competent acting all round... Unfortunately this isn't enough to overcome the problems that stem from a formulaic plot and a lack of ideas in the second half.

Nothing Left to Fear is a mild disappointment - as the foundation for a rich mythology that goes too unexplored to be memorable, much less meaningful, it leaves plenty left indeed to be afraid of.

Well, at least the effects are fear-worthy.

It's stale B-movie rubbish of a barely watchable sort.

Audience Reviews for Nothing Left to Fear

There are no featured audience reviews yet. Click the link below to see what others say about Nothing Left to Fear!

Nothing Left to Fear Quotes