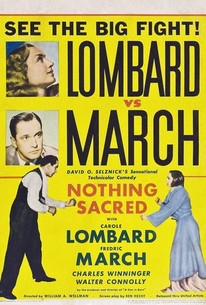 In this comedy, Wally Cook is a hotshot reporter condemned to writing obituaries. Anxious to get back in the good graces of his editor Oliver Stone, Cook pounces on the story of New England girl Hazel Flagg, who is reportedly dying from radiation poisoning.

Raymond Scott and His Quintet
as Orchestra

Betty Douglas
as `Helen of Troy'

Eleanor Troy
as `Catherine of Russia'

Critic Reviews for Nothing Sacred

The luster is fading on this "classic" too fast for the shine to last.

The principals are excellent as usual, and have the additional fine support of Charles Winninger and Walter Connolly.

The perpetual digs against journalists are especially amusing, as when someone cracks that even "the hand of God reaching down into the mire couldn't elevate one of them to the depths of degradation!"

Wellman knew to keep this story short -- it runs just 73 minutes -- and speedy. And yet he understands how to conduct it so that it's more than just breakneck comedy.

The film has been perceived as a satire on yellow journalism due to Hect'd experience. There's a key line in which a NY journalst is told: A Newspaperman? The hand of God reaching down into the mire couldn't elevate one of them to the depth of degradation

It's pretty good, but it ought to be so much better.

Audience Reviews for Nothing Sacred

Ben Hecht was as smart a writer as they come, his work notable chiefly for his cynical but humorous bite, a jaded, crusty, hardboiled view of humanity tinged with heart, and here is no exception. A wily big city reporter attempts to salvage his flagging reputation by milking a cute story about a dying small town woman ... only she's 100% in the pink. And he doesn't know that. Although already designed from the ground up as built for fun it still rests firmly on the charismatic shoulders of its two leads. Fredric March is more than capable as the reporter, particularly with the laidback visit to stoic Vermont scenes, but the thing takes off and flies every time Carole Lombard even comes close to camera time. Tasty!

Another thirties' screwball comedy from the ubiquitous and always entertaining Carole Lombard, there isn't too much hilarity ensuing in this film compared to later works, but does manage to entertain. Most of the time the film does so with its interesting plot, centered on heroine Hazel Flagg (Lombard). Hazel finds out from her beloved physician that she is in fact not dying from radium poisoning as she had previously learned. At that exact same moment reporter Wally Cook (March) arrives in town to find her, whisk her away from the small town where she lives, and promises that he will make her the toast of New York City. Never having traveled anywhere, and fixed recently on her mortality, Hazel lies and goes back with Wally. Of course she takes her physician, makes him lie, and oddly does become the toast of the city, even reducing people to tears at the mere sight of her on the street or in a club. Hazel revels in the attention, and the love of the city, all the while falling in love with Wally, who is using her himself in order to get back in the good graces of his editor after a botched charity event. Of course it is Lombard's performance that makes this film even a little famous, not only for her impeachable beauty and reputation for being a loud and impish actress, but also because she was genuinely funny throughout her career. Even here she is flawed for taking the trip, but lovable as she makes everyone fall for her. March is also entertaining as the handsome love interest, but is rather flat throughout most of the film. Once Wally is made aware of her circumstances (as always inevitably happens) he tries to keep the secret from his editor. This does lead to one questionable scene where Wally hits Hazel so she passes out and he can fake a disease so they can fool the editor. This film is also shot in Technicolor, which looks odd since this film came out in 1937, two years before "Gone with the Wind" and several years before it was considered acceptable to make most films in color. The shots of the city simply look off thanks to a lack of understanding when it came to the process. This film is also famous for being the first film shown on television with a commercial break. Because of Lombard this film still receives attention, but besides her presence, the rest of the film slips into melancholy more often than not, and doesn't take enough chances or advantages towards the film's premise.

Although the romantic side of this movie is predictable, the comedy is good, and the story is interesting. It's not the best movie, but still pretty entertaining.

Not only was Nothing Sacred the first Technicolor screwball comedy, it's also the only colour movie Carole Lombard ever made, so it pains me to confess that I'd probably like it better if it'd been shot in black & white! Doubtless viewed at the time as adding a touch of class, the colour photography is drab and does nothing for the picture, and the sets are equally ugly. I cannot think of this film without bringing to mind a particularly sickly shade of blue! The tastelessness of the central conceit - country girl, misdiagnosed with terminal radium poisoning, shams illness to enjoy an all-expenses-paid trip to New York - ensures that the movie retains a freshness, despite the fact that some of the gags have not aged so well. In particular, the sequence where the nightclub emcee introduces the "Heroines of History" is fairly excruciating, and I'm usually also able to restrain my mirth when Fredric March socks Lombard on the jaw, though the rest of that scene is hilarious. My only criticism of the excellent cast is that the usually brilliant Sig Ruman is badly wasted as Emil Eggelhoffer, the expert on radium poisoning who exposes Lombard; he is far funnier in Billy Wilder's The Fortune Cookie, playing practically the same part. Some of the dialogue is priceless! My favourite exchange: - HAZEL FLAGG: You know, I'm not going to bed until I have convulsions and my teeth start falling out! That's when I begin worrying? Is it, Enoch? - DR ENOCH DOWNER: It's as good a time as any.