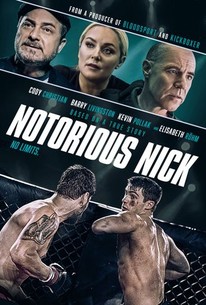 Even though he was born with a partial left arm, Nick Newell (Cody Christian) dreams of being a fighter. After wrestling in high school, Nick becomes a fierce competitor when his best friend, Abi, introduces him to mixed martial arts. Suddenly, a tragedy provides Nick with an unexpected opportunity, but to succeed he must commit to becoming the fighter he always hoped to be. Elisabeth Röhm (American Hustle) and Kevin Pollak (The Usual Suspects) also star in this thrilling underdog tale based on an inspiring true story.

It's a superficial treatment that favours messaging and easy momentum over any taxing grappling with emotional complexities.

This real-life underdog sports movie, set in the world of mixed martial arts, is...riddled with clichés, but features some decent performances and well-staged fight scenes.

As is often the case with movies like this, the brief documentary clips during the closing credits are more compelling than all the preceding drama.

It follows the fighter's life and career in rushed, broad strokes...

It's not just "inspired by a true story." It's inspiring.

There are no featured reviews for Notorious Nick at this time.