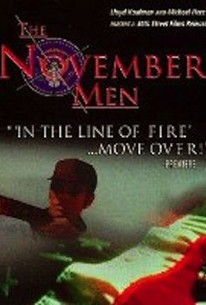 Troma, that little independent tiffany company that produced such delicate bon-bons as The Toxic Avenger and Surf Nazis Must Die, set up their own specialty branch, 50th Street Films, to release films requiring a more delicate touch. So what better outfit to handle a quiet little direct-to-video release about presidential assassination like The November Men? Director Paul Williams stars as Arthur Gwenlyn, who organizes a gang of revolutionaries, terrorists, war veterans, and cut-throats to journey to Washington to kill then-President George Bush. Williams, going the Oliver Stone route, utilizes a bevy of actual footage of George Bush and other political leaders, charmingly framed in gun sights. But as Gwenlyn's men move closer to Washington and their target, Gwenlyn's own motives for bringing the group to the nation's capital become more mysterious and obscure.

Robert Davi
as Himself

Dave Young
as Policeman at Tape

Critic Reviews for The November Men

There are no critic reviews yet for The November Men. Keep checking Rotten Tomatoes for updates!

There are no featured reviews for The November Men at this time.