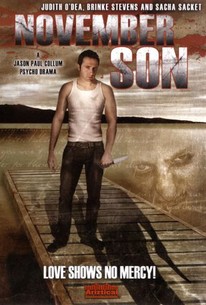 The horror that began in director Jason Paul Collum's October Son continues in this sequel about a mother coping with the loss of her son, and wrestling with the realization that she may have driven him to become an obsessive killer. A horror soap opera that doesn't shy away from psychological torment, November Son opens with Emily Hamilton (Judith O'Dea) still mourning the loss of her beloved son Elliot (Jerod Howard). Meanwhile, Nancy (Brinke Stevens) longs for the same kind of love she once shared with Corin (Sean Michael Lambrecht), Maggie (Darcey Vanderhoof) reaches out for a confidante like Jake (Jeff Dylan Graham), and reclusive Marti (Tino Ona Paukstelis) has allowed a secret concerning those in Elliot's life eat away at her psyche for the last two years. Could Eli (Sacha Sacket) and George (Lloyd Pederson) hold the key to helping these wounded women recover from the traumas of their pasts, or will their efforts to force the women to confront their lingering fears and guilt ultimately prove the catalyst for total annihilation?

Lloyd A. Pedersen
as George

Sacha Sacket
as Eli
View All

There are no critic reviews yet for November Son (November Sun). Keep checking Rotten Tomatoes for updates!

There are no featured audience reviews yet. Click the link below to see what others say about November Son (November Sun)!