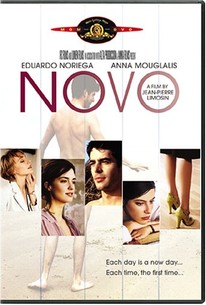 The nature of love and memory and how the two sensations interrelate are explored in Jean-Pierre Limosin's 2002 film Novo. Office worker Graham (Eduardo Noriega) suffered a head injury that destroyed his ability to maintain long-term memories. Falling in love with the forgetful Graham, temporary office secretary Irene (Anna Mouglalis) takes the opportunity to engage Graham in a sexual relationship that feels like the beginning of a hot romance -- with plenty of adventurous sexual encounters along the way. While Irene insists that she'll maintain the memories for both of them until Graham recovers, she begins to wonder if their romance will endure without his being able to remember any of the hot details from their short history. Novo was a chosen for inclusion into the 2002 Locarno International Film Festival.

Dominic Gould
as Gilles
View All

Sleek, attractive and ultimately vapid, Novo applies to sex and love the concept of short-term memory loss used to such acute dramatic effect in Memento.

Limosin's elliptical narrative, meant to correlate with his protagonist's blank-slate mind, instead plays as desultory and just plain confused.

It's not hard to be charmed by lead actor Noriega.

Taking a cue from Memento, Novo positions a flesh-and-blood man's short-term memory as a kind of moral invisibility cloak.

Despite its philosophical pretensions, the film is fairly lightweight, and its good-looking cast and sleek production values are more memorable than any of its heady themes.

It's Memento as a Eurotrash sex comedy.

Memento with more tits, but with less brains.