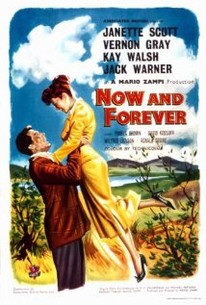 Now and Forever is a very slight piece, buoyed by the charm and attractiveness of its young stars. Janette Scott and Vernon Grey play Janette Grant and Mike Pritchard, who fall in love despite the objections of Janette's wealthy parents. Realizing that they will never be permitted to marry, Janette and Mike run off together, sparking a nationwide search for the two elopers. By the time the authorities catch up with the pair, public sentiment is firmly in favor of their union, culminating in a conditional change of mind on the part of Janette's mom and dad. Though the film seems flat and obvious when viewed on television, it truly comes to life before a large and appreciative moviehouse audience. Forgotten for many years, Now and Forever was happily rediscovered by the late film historian William K. Everson in his 1979 book Love in the Film, which was dedicated to star Janette Scott. ~ Hal Erickson, Rovi

Critic Reviews for Now and Forever

There are no critic reviews yet for Now and Forever. Keep checking Rotten Tomatoes for updates!

There are no featured reviews for Now and Forever at this time.