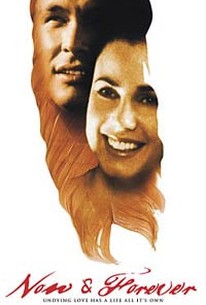 Two young people learn an invaluable lesson about what love really means in this romantic drama. Angela (Mia Kirshner) and John (Adam Beach) have been close friends since childhood, and as they've grown into adulthood, John's feelings for Angela have matured into love. John is of Cree Indian heritage, and Ghost Fox (Gordon Tootoosis), a spiritual advisor of the tribe, tells John that it is his destiny to be with Angela. Angela, however much she cares for John, has other plans, and ends up involved with T.J. (Gabriel Olds), a mean-spirited man who shows her little respect. John saves the day for Angela after she's brutally attacked by T.J., but rather than stay by his side, Angela, who has always dreamed of being an actress, decides to move to Hollywood and try her luck, only to learn that her bond with John is deeper and more complex than she imagined. Now and Forever also stars Theresa Russell as Dori, Angela's mother.

This unrated film is best suited for television exposure to young teenage girls, who might actually fall under the spell of its particular brand of hokum.

At least the title's accurate: This is a viewing experience that feels like it will never end.

A story told with all the subtlety of an old country song.

Even a Sixth Sense-style twist at the end isn't enough to redeem Now & Forever.

Perhaps it was the film's irrevocable destiny to eventually find its way to the big screen, where, like its heroine, it can live out its last days in peace.

Shows genuine compassion and understanding of faith and culture clash.

Clark's direction is professional enough, as are the lead performances, but the movie is doomed from the get-go by Bill Boyle's mawkish, cliché-ridden screenplay.

This poorly executed film is riddled with every cliché in the book and then some.

A small jewel of a film about American Indian spirituality

Has some of the schmaltz but little of the appeal of Arthur Hiller's 'Love Story'.

Heaven help us avoid saccharine sentiments, especially if they're wrapped in a candy-colored package like Now & Forever.

Among his collection, this is my absolute Adam Beach film. Love it!!