Nowhere in Africa (Nirgendwo in Afrika)2001 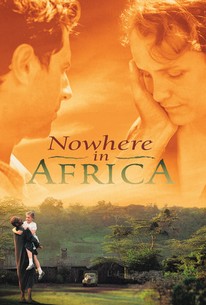 A tale, which follows a young Jewish family from Germany to Kenya as they flee the Nazi regime at the onset of World War II. Jettel Redlich, of upper-class upbringing, and her daughter Regina, moves to Kenya to be with her husband Walter. Walter works as a farm manager, while Regina and Jettel are adjusting to their new home. Then Britain declares war on Germany, and the family is again separated. Through Jettel's affair with a British solider, her family is given preferential treatment. Regina is able to attend school and Walter is given a good job. But after the war, the family is too fractured to reunite and Walter contemplates a return to Germany, while Regina and Jettel have never felt more at home.

Critic Reviews for Nowhere in Africa (Nirgendwo in Afrika)

Link's movie is an absorbing tale of cultural displacement and adjustment. It's also a remarkably complex examination of a marriage.

Everything in the film rings true, is deeply moving, richly photographed, and wonderfully acted.

It's exactly the sort of import you'd expect to walk off with an Academy Award.

The acting is excellent.

The film has the glorious sweep of an epic.

Link creates a complex and fascinating portrait of a marriage under the enormous stress of geographical dislocation and historical trauma.

Those who missed Nowhere in Africa in theaters (no small number, most likely) will find it just as compelling on the small screen.

Nowhere in Africa is long enough that each character is meticulously studied and developed while Link takes the time also to provide wonderfully patient, artistic moments

Audience Reviews for Nowhere in Africa (Nirgendwo in Afrika)

A Jewish family from Germany flees to Africa to avoid the rise of Hitler. The performances by all the main actors are absolutely excellent, especially by Merab Ninidze and Sidede Onyulo. The characters ring true, and the situations are all believable. Even the bratty behavior by Jettel, who misses the privileges of her life in Germany, seems logical when one remembers that she doesn't have the benefit of concentration camp photographs that have been handed down to us by history. Ironically and interestingly, what is frustrating about Nowhere in Africa is also one of its greatest strengths: once again, here is a film about Africa with white protagonists, so the racism inherent in never telling African stories from an African perspective continues. Yet the point behind Nowhere in Africa is that even victims of racism, in this case the Jewish family, can exhibit racist tendencies. It's a remarkable concept because unlike other films about Nazism it doesn't reduce the world into clearly defined categories of good and evil. The ending is unsatisfying, but the film opened a Pandora's Box with the complexity of its theme, and any ending that I can think of would ultimately be as reductive as the one the filmmakers chose. Overall, Nowhere in Africa is a very good, unique film if only for the cinematography, but the complexity of its theme and the sharpness of its characters make it quite extraordinary.

A different tale of WWll, that of an affluent Jewish family that escapes Germany to live dirt poor in Kenya. A very busy film, interesting and multileveled, with stuff constantly going on that threatens to break up the small clan, not the least being how they themselves disagree about Africa and her people, Germany and her people, and where is it that they really belong. Thoroughly engaging.

An excellent historical expose of exiled jews, and the trials they suffered during WWII. Very insightful film. One more take on the Nazi atrocities, and the resettlement of Jews. Interesting to show that there were those who believed enough in their German heritage to have the committment of reconstruction.

Bob almighty! I have no idea just W.T.H.I.G.O. (What The Heck Is Going On) with my head. Tubbs had to help me to bed last night, even. Too much "Drink", I think, and now I got a vicious hangunder. Stinkin' Super Bull party. I never knew a bull could be so super. And the celebrating? Y! (Yikes!). I.C.B.H.C. (I Can't Believe How Crazy) we were. All for a bull (and it wasn't even that nice either, despite its superness - it even had the audacity to refuse to wear sombreros. ¡Que horrible!). I mean, the war's still goin' on! And here we are crazyin' it up for a party. Whitesnake passed out early (ghosts can't hold their "Drink", apparently). And Squiggy darn near drank his life away. He had so much "Drink", he almost made the bum-to-hallucination crossover (which would be a first). U. (Ugh). I feel as if it isn't just the "Drink" that's getting to me. I think something else is at work here. Something...dark. And no, I don't mean dark like the Methochaun's jet black saliva. I mean [i]DARK[/i] dark. Ya know, like, uber-dark. Uhh...Oh, like 4 Candymen of the Uh-Pocket Clips are riding in on their lollipop steeds, bringing the sweet-tasting end of the world with them. Yeah, that kinda dark. Hmm. I wonder I.T.C.B.S. (If They Could Bring Some) more maple syrup, 'cause these waffle legs just aren't the same without it. (chokes down a dry waffle leg; groans) Oooooh, bad move! ... [i][size=1]Bogart approaches![/size][/i]