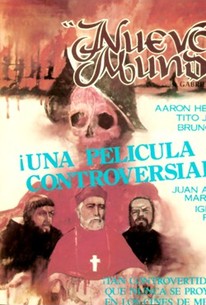 Gabriel Retes's period religious drama Nuevo Mundo (AKA The New World, 1978) concerns a 16th century Machiavellian priest who devises a wicked scheme to convert mass numbers of South Americans to Catholicism. He teams up with an artist to create an icon of an "Aztec Virgin Mary," reasoning that many indigenes will see the image and be induced into worshipping Mary and accepting Christianity. Aaron Hernan, Tito Junco, Juan Angel Martinez and Elpidia Carrillo co-star. The Vatican instantly objected to this film, and banned it for well over twenty years.

There are no critic reviews yet for Nuevo Mundo. Keep checking Rotten Tomatoes for updates!

There are no featured reviews for Nuevo Mundo at this time.