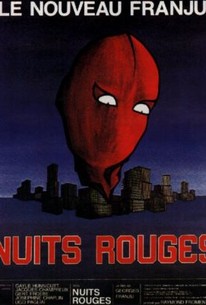 The Man Without A Face is an archvillain, comic-book style, and in this French action movie, he proves to be a worthy foe. The villain has an extensive crime network, including a retreat under the streets of Paris. He has discovered that the Knights Templar, outlawed many hundreds of years before, still exist as a secret society, and that they have access to a hidden treasure of gold. He wants it, and it is up to the daughter of a murdered Templar and a few none-too competent policemen to prevent him from getting it. ~ Clarke Fountain, Rovi

Jacques Champreux
as The Man

Gayle Hunnicutt
as The Woman

This was Franju's last film for the cinema.

knowing trash of the most impressively confounding kind, recalling not just the serial sensationalism of Feuillade but also the early, paranoia-inducing gialli of Argento.

There are no featured audience reviews yet. Click the link below to see what others say about Nuits rouges (Shadowman)!