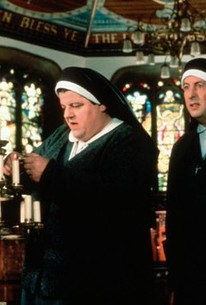 Nuns on the Run Photos

Eric Idle and Robbie Coltrane team up for this bad boy comic burlesque, directed by Jonathan Lynn. Idle and Coltrane play Brian Hope and Charlie McManus, a pair of two-bit hoods who want to go straight, repulsed by the increasing reliance on guns and violence in their line of work. In thrall to vicious gangster Case Casey (Robert Patterson), the duo determine that their next job will be their last. When a large amount of money is extracted from a gang of Hong Kong drug dealers and it falls into the laps of Brian and Charlie, the two take off with the loot, with the Chinese Triad and Casey in relentless pursuit. When their car runs out of gas in front of a convent, Brian and Charlie run inside and disguise themselves as two of the ugliest nuns imaginable. Inside the convent, Brian and Charlie pass themselves off as nuns from a different order, assigned to the convent before leaving the country on missionary work. As the two men enjoy their undercover work with a collection of nubile nuns and coeds, the bad guys close in on their trail.

Doris Hare
as Mary of the Sacred Heart

Lila Kaye
as Mary of the Annunciation

Lee Simpson
as Policeman with Radio

Critic Reviews for Nuns on the Run

The crime-tinged subplot is essentially bare bones, the barrage of batty British one-liners a lackluster hash.

The script`s imagination seems to have ended with the sight of men in religious women`s clothing.

Why do filmmakers so often insist that nuns are funny? I'll bet there are some psychological reasons buried around here somewhere.

Pretty much a one-joke film, and the joke feels about 20 years old.

The gags run the gamut from obvious to odious.

A spot of good cheer, especially if you're looking for a movie that asks little of its viewers.

Complete crap. Idle and Coltrane have both been much better.

"makes a habit of being unfunny"

Audience Reviews for Nuns on the Run

An ok comedy as 2 bank robbers go undercover as nuns.

Typically of British comedy, this film take two very funny men and drops them into one cliched witless situation after another in the vain hope of making the audience laugh. The result is the usual unfunny schmaltz and two middle aged men running around in drag. Ho ho.

Like Jack Lemmon and Tony Curtis in the Billy Wilder classic Some Like It Hot, Eric Idle and Robbie Coltrane are motivated by fear for their lives to dress in women's garb. They make a wonderful pair of dumbbells, both in and out of their habits.

Nuns on the Run Quotes