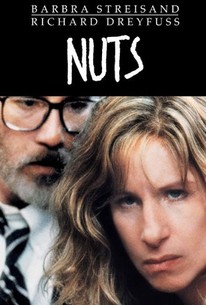 High-priced hooker Claudia Draper (Barbra Streisand) has been arrested for the murder of one of her clients. The attorney engaged by Claudia's parents hopes to cop an insanity plea so that she can avoid a trial and manslaughter conviction. But she refuses this, citing a proviso in New York law that may result in her spending the rest of her life in an institution. Against all odds, struggling lawyer Aaron Levinsky (Richard Dreyfuss) tries to prove that Claudia is not crazy and is capable of standing trial. He certainly has his work cut out for him; the violently impulsive Claudia is not only "nuts," but certifiably so. Though she has plenty of opportunity in Nuts to give out with her usual bravura Streisandisms, Streisand (who also produced the film and wrote the songs) is surprisingly restrained through most of the proceedings. And then there's that extended-monologue climax. Nuts was adapted by Tom Topor, Darryl Ponicsan, and Alvin Sargent from Topor's stage play.

Streisand produced, developed the script, and composed most of the music for this showpiece, and her efforts, as usual, pay off, above all in her angry and lively performance.

Streisand's a star, which means your complicity is on call at all times. In the shade, Dreyfuss is terrific, banking down his natural cockiness.

The film is almost entirely adrift.

It's Hollywood manipulation at its best.

It wants to be a movie with a message, but in the end it's just a melodrama.

Nuts is a treat on so many levels that Streisand, who also produced the film, should be especially proud. When Academy Award nominations are announced in February, her excellent performance is bound to be recognized.

The movie makes the big mistake of turning the actors into commentators, offering verbal support to images that are reality. [Full Review in Spanish]

Its dialogue, cliched and lacking subtlety, constantly threatens to reduce the whole production to cheap melodrama.

All of the secondary roles are well cast, and Martin Ritt's direction is as good as it can be, considering the script's limitations.

Misfire with Streisand doesn't know if it's funny or pitiful. But it IS depressing.

Underated movie with great performances by Streisand and Dreyfuss.

It was slightly unbelievable for me since if I'd such a client to defend who is not willing to co-operate the least, I don't think I'd touch that case. Or else give up easily. Then again, I ain't no lawyer!!! They show her crossing the limits so many times that it becomes hard to digest it that she ain't a nut. Leaving aside this minor problem, the movie works fine as a courtroom drama.

Really powerful and intelligent film based on Tom Topor's Broadway play as this is a highly charged drama that raises some uneasy questions. This is a film that deserves more attention then it originally received, it is honest, though-provoking, and features a brilliant performance from Barbra Streisand as real-life defender Claudia Draper. Richard Dreyfuss also turns in his usual skilled performance as a lawyer who becomes more passionate about the case the longer he is involved with it. His eventual concern for Claudia is touching. And Karl Malden, Maureen Stapleton, James Whitmore, and Leslie Nielsen all play excellent supporting roles.