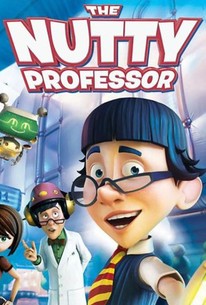 Comedy icon Jerry Lewis revisits one of his most famous film characters in this belated, animated sequel to the beloved 1963 classic of the same name. It's been decades since clumsy Professor Julius Kelp (voice of Jerry Lewis) created the magical elixir that transformed him into a smooth-talking ladies man, but when Julius' grandson Harold (voice of Drake and Josh star Drake Bell) gets his hands on the secret formula, the familiar tale gets an exciting new twist. An adolescent misfit who never really fit in with the crowd, Harold becomes infinitely more confident and suave after whipping up a batch of the elixir and taking it for a test run. Now, as Harold's emerging ego begins to turn destructive, the young schoolboy must learn how to contend with his fears and insecurities without the aid of any questionable concoctions from the lab.

Critic Reviews for The Nutty Professor

Animated update of Jerry Lewis film is all about bullying.

Audience Reviews for The Nutty Professor

There are no featured audience reviews yet. Click the link below to see what others say about The Nutty Professor!