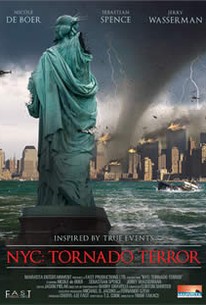 The deputy mayor of New York City and his meteorologist wife race to save the Big Apple from a series of devastating tornados created by global warming in this made for television disaster film. The upper and lower atmospheres have split, giving birth to towering tornados and unpredictable electric storms. When an enormous jet-stream vortex fills the skies over Manhattan, numerous twisters emerge from its center and send towering skyscrapers crumbling to the ground. Just when it seems that all hope is lost, Deputy Mayor James Lawrence (Sebastian Spence) and his wife Cassie (Nicole DeBoer) realize that in order to stop the storms, they'll have to innovate. But time is running out, because at the rate the storm is building, the entire city will be completely leveled in less than 24 hours.

There are no critic reviews yet for NYC: Tornado Terror. Keep checking Rotten Tomatoes for updates!

There are no featured audience reviews yet. Click the link below to see what others say about NYC: Tornado Terror!