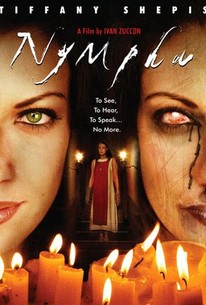 An aspiring cloister nun experiences unimaginable physical and mental torment upon traveling to the "New Order" Convent in Italy and subjecting herself to the four rigorous steps thought to bring one closer to God. Sarah is a young English girl who longs to dedicate her life to the lord, even if it means living under rules that would be considered torture by most. Sarah's path to salvation is divided into four steps: "hear" the Lord, "see" the Lord, "touch" the Lord, and "talk" to the Lord. Should she somehow manage to transcend her pain and live through this rigorous indoctrination, she will finally be accepted into the convent. In the midst of this grueling process, however, Sarah begins experiencing strange visions of a young girl named Ninfa whose grandfather Geremia was a violent religious fanatic. Geremia believed that he could talk directly with God, and his madness still lingers in the darkened corridors of the convent to this very day.

There are no critic reviews yet for Nympha. Keep checking Rotten Tomatoes for updates!

There are no featured audience reviews yet. Click the link below to see what others say about Nympha!